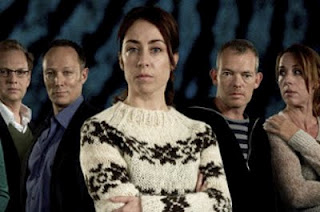 Sarah Lund in that sweater, flanked by the major figures of the first season's case.
Advertisement:

This is the entry for the Danish-language TV series known in English as The Killing. If you're looking for the American remake, go here.

A tale of murder, politics and knitwear, Forbrydelsen (first season 2007, second 2009, third and final 2012), literally translated as "The Crime", but known in English as The Killing was a crime drama produced by State Broadcaster DR.

The first season, set in Copenhagen, focuses on the murder of Nanna Birk Larsen, a 19-year-old Danish schoolgirl. Each episode of twenty focuses on one day in the investigation, from three different perspectives:

Detective Inspector Sarah Lund (Sofie Gråbøl), a dour moody woman who likes wearing Faroese sweaters, is about to move to Sweden with her boyfriend, but decides to stick around and work with her replacement, Jan Meyer, to solve the crime.

Troels Hartmann is trying to become Lord Mayor of Copenhagen, when his campaign gets connected to the murder and his own activities come under scrutiny.

Theis and Pernille Birk Larsen, Nanna's parents, have to come to terms with the murder of their daughter. Their decisions will shape their lives and those of others.

The second season is set two years later and revolves around the Danish military. Lund, having been exiled to a passport control job, is called back to Copenhagen when Afghanistan veterans start getting bumped off in gruesome ways, creating a panic over Islamist terrorism. Meanwhile, new Justice Minister Thomas Buch is trying to get a new anti-terror bill through parliament, while trying to find out just what was going on with his ill predecessor.

In the third season, Lund is trying to get a less stressful administrative job in the police, but finds her old obsessions growing again when the discovery of a dead body by a dockside turns out to be the forerunner to the kidnapping of the young daughter of a shipping magnate, which appears to be connected to the rape and murder of a schoolgirl years before.

A massive hit in Denmark (a third of the population turned in for the first season finale and the second half of the season was brought forward), when shown in the UK on BBC4, got rave reviews, huge audiences for the channel and won the 2011 International BAFTA. It has become a Trope Codifier of the Nordic Noir genre and combined with Engrenages opened the floodgates for subtitled shows in the British market.