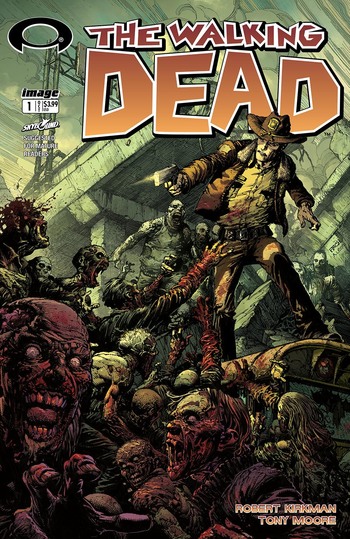 "Got bit. Fever hit. World gone to Shit. Might as well quit."
"Zombies don't represent anything in my mind except a global change of some kind. And the stories are about how people respond or fail to respond to this. That's really all they've represented to me."
— George A. Romero, director of Night of the Living Dead (1968)
Advertisement:

Within the past couple days or hours, something very strange has happened. Maybe the Synthetic Plague the government was working on got unleashed. Maybe a voodoo priest's spell went awry. Maybe an alien space probe broadcast a weird signal at the Earth, or fell to Earth and brought radiation with it. Maybe there's just no more room in Hell.

Whatever the cause, the result is the same; the recently dead have risen, en masse, to feed on the living. With each victim they claim, their numbers swell, and no force on Earth can contain them. As society collapses, it's up to the Big Damn Heroes to fight their way to safety or keep shooting until things blow over.

The Zombie Apocalypse has arrived.

While Horror is assumed to be an inherent part of the zombie apocalypse, not all the horror and conflict comes from the zombies themselves. Instead it can come from the reaction of the living humans involved, and how they respond to the state of fear and violent chaos brought about by the zombies. Often, the answer is "not well". The breakdown of society, the fear that your Fire-Forged Friends could be infected and turned against you without warning, are at least as important to a zombie story as the zombies themselves, if not more so.

Common to virtually all Zombie Apocalypse tales is that, regardless of the reason zombies attack living/non-infected people, they never attack other zombies. Whether they'll attack animals other than humans varies, but it's rare for The Virus to affect other species, probably because it's cheaper and easier to film humans in make-up than to work with animals, whether trained, animatronic, or CGI.

Due to the threat that zombies pose (they did just become the apocalypse, after all), protagonists of more serious works are required to become very smart very quickly (but will be ignorant with regard to the word "zombie" itself). Failure is often the only option in these stories; rarely do they have an ending that could be considered "happy" by typical standards, or indeed one where humanity survives as a species. Another main staple is that things will always, always go From Bad to Worse. Either from the character's actions or circumstance which are out of their hands, no matter how improbable it is.

The Militaries Are Useless trope is usually a must in such a movie, if only to avoid the film ending in five minutes. If they ARE actually competent, they'll likely happen to be evil.

The collapse will also take place very quickly, over a period of weeks or months, instead of years. This prevents society and/or the main characters from adapting, and also makes Convenient Comas somewhat plausible. In the occasion where collapse occurs in a couple of months, a nuclear submarine, aircraft carrier, or other large vehicle could realistically be expected to weather the entire outbreak start to finish in perfect isolation and safety. Characters may also assume that their portable radios have infinite reception and frequency range, and local dead air means a completely global collapse. The audience may not need to speculate about this, if a Spreading Disaster Map Graphic crops up in the opening credits.

Another common staple of the Zombie Apocalypse is that the zombies are often not the most dangerous enemy that a survivor will face. It's usually other survivors, power-hungry maniacs or regular-hungry people who want to attack you to get at your food and shelter. Sometimes Humans Are the Real Monsters will occur (after all, a zombie is just a degraded human!)

Subtrope of Our Zombies Are Different. A member of The Undead trope family. See Night of the Living Mooks for cases where zombies don't threaten the end of the world. See also Zombie Gait, Everything's Deader with Zombies. Raising the Steaks is what happens when humans are not the only creatures that can be infected by The Virus. The zombie apocalypse is almost always a case of Guilt-Free Extermination War requiring that everybody be armed. Expect a healthy dose of Improbable Infant Survival — for despite a population of millions of children at any given time in any human population very few will become (visible) zombies — and the few that do are for audience effect. Also expect the Incongruously Dressed Zombie to turn up for occasional comic relief. Contrast Friendly Zombie, who is not there to make an apocalypse. (Attractive Zombies also generally tend to avert this, due to Beauty Equals Goodness).

The trope Zombie Apocalypse refers to any kind of undead apocalypse, with the common traits of this trope are that the undead spread rapidly, wipe out humans primarily by eating or biting them, and are usually highly infectious — even if the undead happen to resemble vampires or yet another kind of monster more than zombies. Vampire versions of this nearly always involve Feral Vampires.

If you are looking for different types of Zombie, see Our Zombies Are Different. Not to be confused with Vampire Apocalypse: The Series by Derek Gunn. Sometimes the 'zombies' might be a case of the Technically Living Zombie, but the overall narrative usually plays out the same way regardless.

A Zombie Apocalypse can be considered a sort of Came Back Wrong on a very large scale.

Also known as a "Zombocalypse".