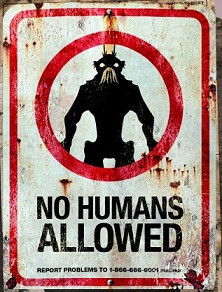 Where Fantastic Racism meets Urban Segregation. The Fantastic Ghetto is a place where an undesirable racial minority is rounded up inside to keep them out of the majority's line of sight.
Advertisement:

Ghettoes are very much a case of Truth in Television: the term "(bor)ghetto", Italian for, more or less, "little town", originally referred to the district in City-State Venice where the Jews were supposed to live. Ironically, it has been asserted that the original Jewish ghettos were privileges, designed to protect Jews from unfriendly Gentile citizens, provided by the local rulers, including walls and locked gates which were bitterly resented by the locals. Like all well-meaning attempts at segregation, the "special treatment" not only turned out to be not so special, but increased division and tension between communities, especially since the ghettos were often poorly maintained and serviced, despite the frequent promises to the contrary. Additionally, their separation from the rest of the city often made doing business difficult for those who lived there, meaning that the community within the ghetto would become poorer over time. When American segregation was being litigated, testimony from the Middle Ages was actually used in court to prove that the claim of "separate but equal" was an impossibility.

As a form of racial segregation, whether deliberate or emergent, ghettos still exist to this day, usually because of a practice often called "redlining" wherein economic and social factors are used to keep people from buying houses in a certain area. This can even include rerouting streets or subway lines to discourage traffic to a particular area. Therefore, the topic is usually approached with caution in fiction, usually from the Fantastic Racism angle. However, it can also be implied by the Unfortunate Implications of having different races live in different areas (say, all the elves living in a hidden woodland glade) with little or no mixing, though it is important to note that not all uses of the Hidden Elf Village trope imply racial segregation: many settings that use this trope also include at least the occasional intermarriage between the "elves" and humans after all. It rather depends on whom the "elves" are trying to hide from, and whether they have a good reason for it.

Not to be confused with Sci Fi Ghetto, or the related term "Fantasy Ghetto", in which the genre gets this treatment by the literary establishment.