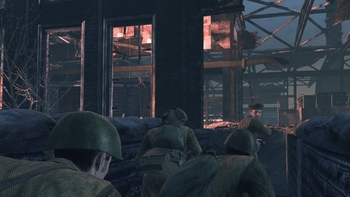 They took one week for fifty metres.
"It's not like a battlefield. The best place for urban fighting is right out in the countryside, sir, where there's nothing else in the way."
— Captain Wrangle, Night Watch
Advertisement:

Urban warfare is very different from conventional combat in the open. Clearing a city full of determined defenders is a very difficult task, as the urban environment negates the effectiveness of many of the most powerful weapons of modern militaries (such as tanks and aircraft), leveling the playing field somewhat for not-so-well-equipped forces that might oppose them. Any building can be turned into a stronghold and pose a major obstacle. Armored vehicles have difficulty maneuvering in tight streets and are vulnerable to attack from above, and artillery and air support won't do you any good if the enemy keeps changing positions, not to mention the high potential for collateral damage. Forget the rules of "gentlemanly warfare." It's all guerrilla warfare here—ambushes, snipers, booby traps, bayonets, Hit-and-Run Tactics and shotguns.

As an unfortunate side effect of the dirty, casualty-ridden, and momentum-killing nature of the fighting, armies are often forced to simply leave the job half done by avoiding it all together (usually due to political implications of such a prolonged, bloody conflict). At other times, they simply flatten as much of the city as possible before/while/instead of fighting over it, thereby neutralizing the "urban" aspect, and usually rendering the place strategically worthless in the process, as well as being, shall we say, problematic to any remaining citizenry. Yet another option is to besiege the city. After all, it's very difficult to grow adequate food supplies in an urban area, and breaking the defending force's spirit is preferable to a drawn out conflict.

Significant street fighting of this type was seen at least as early as World War II (especially the Battle of Stalingrad), though there are several Napoleonic war battles (most notably the Sieges of Zaragoza) that foreshadowed the urban warfare of the 20th century and such battles likely occurred even earlier than that. (See for example the two medieval Battles of St. Albans, discussed below.) Unfortunately this kind of warfare still takes place in various conflicts around the world.

Urban warfare is a nightmare in modern times. Even untrained militia can stand against highly trained troops in the confusing twists and turns of a high population center. It is war at its dirtiest, with collateral damage difficult to avoid and a high potential for confusion. Units often find themselves in a confused tangle of friend and foe.

This kind of setting is likely for an action-heavy video game as the aspects of urban warfare's terrain goes from nerve-wracking and difficult to fully control for an attack in real life, to adrenaline-filled and unlikely to stall due to multiple approaches to advance (helped by windows or high floors being much less readily available than would be realistic) from being difficult to lock down fully with a video game's usually more limited participant count. The close proximity of walls and buildings in a video game can also cover up how their weaponry is modeled as being only capable at a much shorter range than they would be in real life.

Keep in mind that a battle for a city doesn't necessarily count as urban warfare. It requires that the city streets and buildings themselves are the primary battlefield. Often caused by War Comes Home when the character's home happens to include urban settings now bombarded by conflict.

A Sensha-do match between Anzio Girls High School and Bonple High School in an arena that mimicks typical European streets in the early 20th century.

A Sensha-do match between Anzio Girls High School and Bonple High School in an arena that mimicks typical European streets in the early 20th century.