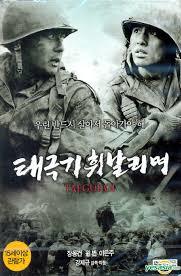 Taegukgi: The Brotherhood of War is a 2003 film from South Korea, directed by Je-kyu Kang, telling the story of two brothers caught up in The Korean War.

Lee Jin-tae (Jang Dong-gun) and Lee Jin-seok (Won Bin) are brothers who live with their mother in the family noodle shop in Seoul. Jin-tae has a side business with a shoe-shine stand, and is working to send his bookish younger brother Jin-seok to college. Jin-tae is also engaged to pretty Young-shin, who works at the noodle shop. This happy life is ruined on June 25, 1950, when North Koreans with Nodongs invade South Korea, starting the Korean War. Jin-seok is forcibly conscripted into the South Korean army, and when his brother tries to pull him off the train, Jin-tae is conscripted too. An officer promises Jin-tae that if he can win the Order of Military Merit, South Korea's highest military decoration, he can get a discharge for his brother. Jin-tae then begins to seek out the most dangerous missions in order to win that medal, but his pursuit of glory alienates his unsuspecting little brother.

Taegukgi is one of the few feature films set in the Korean War. It became one of the biggest hits in the history of South Korean film. The title is a reference to the "taegukgi", the South Korean flag.