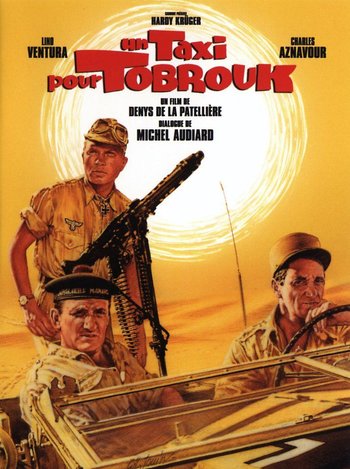 Un taxi pour Tobrouk ("A taxi to Tobruk"note Named after the city in Libya) is a 1961 film directed by Denys de La Patellière, starring Lino Ventura and Charles Aznavour. It features many quotes that became famous in France.

It is set during World War II, in 1941 and 1942 in Northern Africa. A commando of Free French Forces, led by Théo Dumas (Ventura) are stranded in the Sahara desert. They manage to kill a few German soldiers, take their jeep and make captain Stegel prisoner. They travel through German-controlled territory aiming to reach Allied territory while having to cooperate with their prisoner (in a situation that feels similar to Lifeboat).

The film is strongly anti-militarist and shows the absurdity of war.