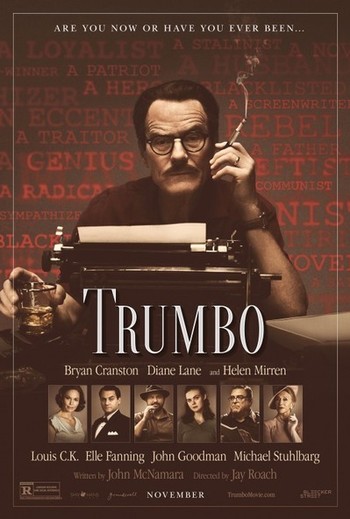 Trumbo is a 2015 biopic about Dalton Trumbo and his experience in The Hollywood Blacklist.

The year is 1947. Dalton Trumbo (played by Bryan Cranston) is one of Hollywood's best screenwriters. An unapologetic member of the Communist Party, he stands with labor unions and sticks to what's right. Unfortunately, the Cold War is in full swing and paranoia has swept America. The House Un-American Affairs Committee begins its sweeping witch hunts to root suspected communists, and Trumbo is thrust into prominence as he stands against people who seek to destroy his career.

This movie contains examples of these tropes: