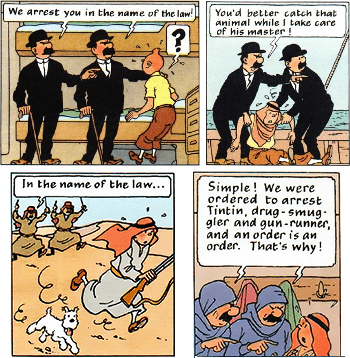 Do they ever leave him alone? The answer is no.
Orie: You are...Ragna the Bloodedge, aren't you?
Ragna: That's never a good question...
Orie: Then it's true. You are the man who holds the Keystone, and are responsible for the slaughter of countless innocents! Don't try to deny it...it's all written down on this wanted poster!
Ragna: What? Wait, that's...agh, seriously!? That stupid poster followed me to this world, too!?
— BlazBlue: Cross Tag Battle
Advertisement:

If sometimes clueless, Inspector Javert is the well-intentioned law enforcement officer (or detective, or Bounty Hunter) who honestly (if sometimes wrongly) believes that the hero is a bad guy and doggedly pursues him in a Stern Chase, seeking to get him. However, the trope is not confined to heroes, and the Javert frequently finds himself pursuing criminals of all stripes, often the powerful or influential Mafia Boss or Villain with Good Publicity. In that case, he will be treated in-story as a noble hero who is completely immune to temptation and utterly dedicated to his duty. This can even apply to petty criminals, resulting in, say, ten years spent chasing down a thief who stole a loaf of bread.

The Javert does not realize that the hero either is wrongly accused, has already redeemed himself for crimes done long ago, or is working towards a much greater good and can't stop to pay for whatever petty or unjust law he may have violated. Perhaps the Javert simply doesn't care, as the law is the law with the rationale that the fugitive can always dispute the accusation in the courts, and one is either on the side of the law, or on the side of crime. Thus, the Javert is the type of person who obeys the letter of the law, but not the spirit of the law. Inspector Javert may be the reason the hero has to keep moving among Adventure Towns. Often, the only way to slow him down is to defeat other violent criminals, then leave them for the Inspector to arrest and process before he can resume the chase.

At some point, however, the officer and accused have to team up to fight a common enemy, or the movie or series ends with them discovering that their entire campaign to bring the hero to justice was in vain, or he is innocent and finds evidence to prove it or they decide to just let them go with a "five minute head start", or something to that effect.

If the Inspector Javert is working for the Police State, he can play with Heel–Face Door-Slam by trying to abuse his authority.

Named for the archetypal character in Victor Hugo's novel Les Misérables, and the subsequent musical. Lt. Gerard in The Fugitive was inspired by Javert, down to the French surname.

A Subtrope of Hero Antagonist and Implacable Man.

Compare Accuser of the Brethren, Knight Templar, and Lawful Stupid. Also compare and contrast Sympathetic Inspector Antagonist; the hero is a Villain Protagonist or Anti-Hero and that Inspector chases a real criminal. May be portrayed as a Butt-Monkey and/or Worthy Opponent by the protagonist. Some examples count as Obliviously Evil. Less sympathetic examples may be a Villainy-Free Villain. Contrast Inspector Lestrade.

The new policeman on the Quarry Tramroad refuses to let Thomas on the line because he doesn't have a cowcatcher and sideplates, and claims him to be a regular lawbreaker.

The new policeman on the Quarry Tramroad refuses to let Thomas on the line because he doesn't have a cowcatcher and sideplates, and claims him to be a regular lawbreaker.