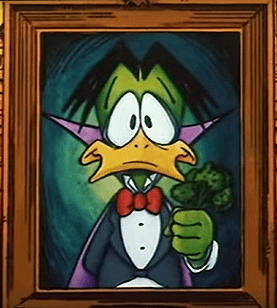 All things considered, he's the third-least angst-ridden vampire-mallard in history.
"He won't bite beast or man, cause he's a vegetarian
and things never run to plan for... DUCKULA!"
— Theme song for Count Duckula
Advertisement:

Vampirism is a nasty, nasty business. By nature, vampires have to kill to survive, and the existence of just one vampire means the death of countless innocent people. Right?

Some vampires have a moral code and are aware of all the suffering their bloodlust can cause, so they go out of their way to not kill humans. They find other sources of blood such as animals (often cattle) or blood banks, or restrict their sources to serial killers and other unsavory types, or draining the victims to an extent that they're not at risk of dying. This often has drawbacks: the blood either might not be fresh or tastes unpalatable compared to (innocent) human blood. It allows the story to play up the "can the vampire control themself" angle.

The really lucky ones can substitute tomatoes, tomato juice, or even the color red.

A common strategy of Friendly Neighborhood Vampires and Vampire Detectives who feel grief at what they've become. Often overlaps with Cursed with Awesome. These are the friendliest vamps on the Sliding Scale of Vampire Friendliness. Compare the Vegetarian Carnivore, although that trope tends to apply to real-life animals; because vampires are mythical to begin with, it takes internal consistency to make a vegetarian one believable, not failing biology forever. See also My Species Doth Protest Too Much, which tends to be more cultural than biological.

Alternative Title(s): Vampire At The Bloodbank