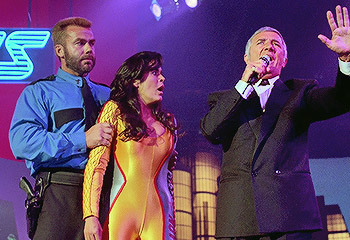 "It's time to start running!"
— Killian, The Running Man
Advertisement:

Being found guilty of a crime grave enough to merit imprisonment, especially a life sentence or death row, tends to make people less sympathetic to your situation in life, such as is left. This is why convicted felons are on a very short list of Acceptable Targets for a whole slew of not nice things. And in fiction, there are plenty of these not nice things. Military conscription, medical experiments, Blood Sports, Deadly Games, Human Sacrifice, the list goes on and on.

The cons aren't shipped off to a sub-human prison, that would be... wasting resources. Instead, the government uses them in a "contest" of one of the above in order to get some use, entertainment or money out of them. Usually they're "kidnapped" and officially were "Released to Elsewhere", but there's plenty of distressingly legal ways to whitewash the whole bloody affair. The government may declare that All Crimes Are Equal, and as un-persons the prisoners can be used for basically whatever.

If there are those who want to maintain a semblance of humanity and legality, the cons will be offered to participate in the contest as an "option" to serving their full sentence so they can win their freedom. For some reason, the general public is rarely upset by the possibility of a battle hardened ex-con who is in no way rehabilitated being released onto the street... or they would be, if it were public knowledge and if any actually survived. When this trope is used in conjunction with Blood Sport, the reverse seems to be the case. The most successful cons will develop a fan base clamoring for them.

This story very likely takes the (sympathetic) POV of the cons, because sympathizing with people conducting whatever horrific acts are about to be perpetrated on the cons is usually a bit too alienating for audiences. So aside from giving most of the cons a smidgen of sympathetic characterization, there will be one innocent man who was framed to get him specifically into the night's debauchery. (Alternatively, his crime may be justified — stealing bread for the hungry — or not appear serious to the audience — failure to bow before the noble he didn't see.) Usually this one innocent man and the most likable, noble or least evil con will survive to the end; sometimes this is justified by their character making it possible for them to trust each other.

The game is of course rigged to kill all the Condemned Contestants, which makes the protagonist's success a "threat" both because they might get out and expose the charade, and are getting so popular with the audience at home that they'd listen. (If the contestant is honestly given a chance to survive by whoever is in charge, then this trope doesn't apply.)