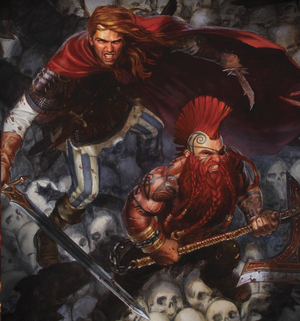 A series of novels set in the Warhammer world.

Felix Jaeger was the son of a wealthy merchant, a student and aspiring writer/poet until the day he accidentally killed a man in a duel. Disowned by his family, he ran away from home, where he eventually became a bit of an activist, and inadvertently started a riot over an unfair Window Tax.

Just as he faces the lance tips of a squad of oncoming knights, Felix's life is saved by Gotrek Gurnisson, a Dwarf with an odd hairstyle and a huge axe. After a night of discussion (and much drinking), Felix discovers that Gotrek is a Troll Slayer, a warrior who seeks his death in combat to atone for a past failure or shame.

And that the previous night, Felix had sworn an oath to accompany Gotrek in his travels and record his doom in an epic poem. And Dwarfs take oaths very seriously.

Now Felix travels the world with his Dwarfish companion, finding the truth about just now nasty the world really is, fighting Evil and Chaos at every turn, and wondering how the hell he's going to survive anything that would be tough enough to kill Gotrek long enough to write about it?

The books were originally written by William King but have since been taken over by Nathan Long. The books are notable for the fact that in the largely grim and depressing world of Warhammer Fantasy, Gotrek and Felix usually manage to make a real difference in the fight of Order vs. Chaos. After twelve books, they've probably killed more enemies of the Empire than anyone who isn't a legendary hero.

Given this series' popularity, it is unsurprising that yet more novels are on the way. The primary storyline was Left Hanging for some time, with the new novels starting with The Road of Skulls being set during the various time skips in the earlier books, but with the big "The End Times" event, the old storyline concluded with new stories bringing Gotrek's saga to a close, to the point they are subtitled "The Doom of Gotrek Gurnisson".

Or not, as Gotrek has appeared in Warhammer: Age of Sigmar, alive despite his supposed doom (which he is not happy about). He is voiced by BRIAN BLESSED in the audiobooks.