But for Me, It Was Tuesday 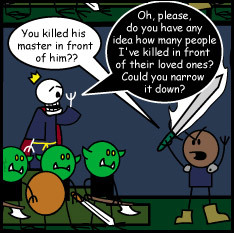 Chun-Li: My father saved his village at the cost of his own life. You had him shot as you ran away. A hero at a thousand paces.
M. Bison: I'm sorry. I don't remember any of it.
Chun-Li: You don't remember?!
Bison: For you, the day Bison graced your village was the most important day of your life. But for me, it was Tuesday.
— Street Fighter

A critical event that started The Protagonist on their journey was an action by The Antagonist. The antagonist, however, has long forgotten this event, because to them, it's just another horrible thing they've done. It can go hand in hand with Unknown Rival.

This is often used to show just how evil the villain is. If The Hero is upset over their murdered father, and the Big Bad barely remembers killing the guy, then clearly the villain has murdered a lot of people in their life, and they have a pretty callous attitude about it. It can be done in a casually hurtful manner, but a Card-Carrying Villain may even mock the hero as being nothing special, just to be a bit more of a Jerkass. Very frequently associated with The Sociopath with a Lack of Empathy; to the person, whatever reprehensible act they just did is just like any other mundane activity to a normal person in terms of emotional impact.

A heroic variation exists where a hero is unable to remember foiling some villain's scheme or putting them in jail simply due to how many bad guys they've defeated/put away, which can really tick off the villain. This is especially true if the forgotten enemy was a mook in their previous appearance(s). Alternatively, the hero may have saved someone who is now a devoted fan of the hero as a result, but when the rescuee later shows up to thank the hero, they could be hurt by their idol failing to recognize them.

Another variation exists where a character is so used to strange or dangerous situations being a part of their everyday life that they're unable to remember a particular event which greatly affected someone.

Even among This Very Wiki, this happens: superfans see tropes of their show (that they have a great knowledge of) on a regular occurrence, but people new to that same show would find the tropes applying rather fascinating (and thus would be mystified if the images do not make sense to them).

Could also be seen as a form of narcissism for the victim who will automatically assume that the one responsible would specifically remember the event because of how important it is to them.

Compare Forgotten First Meeting. Contrast Reminiscing About Your Victims and Would You Like to Hear How They Died?.

Alternative Title(s): But To Me It Was Tuesday