Jumping on a Grenade 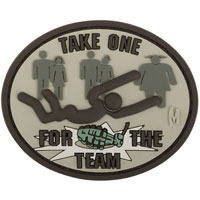 "Must not valiantly push officers onto hand grenades to save the squad."
— Item #201 on Skippy's List
Advertisement:

Someone has just chucked a grenade into the room where The Squad is. One of the squad throws their body over the grenade and makes a Heroic Sacrifice.

The Mythbusters examined this in 2007 and confirmed the myth; jumping on a grenade will significantly reduce the injuries to those around, but it's still a very good idea to get clear. Note that this confirmation only applies to soft, squishy things like a human body — placing a grenade in a harder object, like, say, a refrigerator, will actually increase the damage done, as the hard object turns to even more fragments that can kill. Human bodies are much more effective at absorbing the released energy and shrapnel without fragmenting.

In reality, this is zig-zagged, like everything else in war. Officially, the proper course of action when a grenade lands near is to get as far away as possible before detonation, followed by jumping on it, then by grabbing it and throwing it away as a final resort. Fortified positions, from concrete bunkers to hand dug foxholes, generally have depressions so that grenades that get thrown in can be kicked aside into the depressions and ignored while they detonate safely. On the other hand, the enemy may have cooked itnote held onto the grenade after the pin was pulled and the 3-5 second fuse started burning, to make a shorter time between toss and explosion. It should be noted that this is considered, almost without exception, as a Very Bad Idea and forbidden by most armed forces, as grenade fuses are not reliable, and you're just as likely to have it blow up in your hand as you are to successfully throw it before throwing it in the first place, giving anyone nearby little chance to react.

Compare with Pineapple Surprise (for when a character is blown up by their own grenade), Rocket Jump (when a videogame character creates an explosion to jump higher), Taking the Bullet, and Tuck and Cover. See also Eat the Bomb for an even more extreme (and less realistic) approach to personally neutralizing an explosive. Contrast Explosive Stupidity, where the subject unintentionally blows themselves up.

During an all-out paintball war, Magnitude takes the hit for his group when the enemy sends in a paint bomb on a drone.

During an all-out paintball war, Magnitude takes the hit for his group when the enemy sends in a paint bomb on a drone.