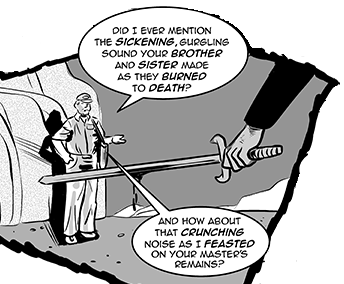 "Do you want to know why I use a knife? Guns are too quick. You can't savor all the... little emotions. In... you see, in their last moments, people show you who they really are. So in a way, I know your friends better than you ever did."
[beat]
"Would you like to know which of them were cowards?"
— The Joker, The Dark Knight
Advertisement:

Villains generally have big egos, and they love to gloat. Given the chance, they can't resist the temptation to insult the hero or to revel in their own wickedness when they think they have the upper hand. A particular brand of Evil Gloating favored by those who enjoy relating their many evil deeds is to describe in detail to the hero how the villain has murdered the heroes' friends or loved ones, preferably in the most unpleasant way possible.

Sometimes the villain does this to mess with the heroes' emotions, or because he wants to frighten them, or provoke them, or he enjoys reliving the memory, or he just plain loves causing pain and can't resist the chance to confront the hero with this source of anguish. Villains who love to Break Them by Talking thrive on this.

However, it is important to note that this trope often has the tendency to backfire on the villain in question. Not only relevant to the dangers that Evil Gloating can cause, a villain who mercilessly mocks the hero about how he just butchered their True Companions has a tendency to cause an Unstoppable Rage or just give the hero that extra incentive to fight back that he needs to put the villain to his end. And woe to the villain who inadvertently awakens a Mama Bear or Papa Wolf by gleefully telling them they just killed their kids...

That said, a reasonably common variation is that the person invoking this trope is actually trying to commit Suicide by Cop, and either deeply regrets what they did deep down, or even were totally innocent of the crime and are just trying to provoke a reaction for some end. Another variation is the villain who wants the hero to strike them down with all of their hatred and are seeking to corrupt them to The Dark Side, turn them into a Hero with Bad Publicity, or enact a Thanatos Gambit or a plan that kicks off with their death.

Usually takes the form of the phrase "Would you like to hear how he/she died?" but doesn't have to, the villain may just start giving lurid details unbidden about the last moments of the person they've killed, possibly accompanied by an Evil Laugh, or make things up about how the victim begged for death, or outright lie about killing them entirely just to generate a reaction. It can be combined with a Post-Rape Taunt for extra Kick the Dog factor. Also bonus points for trying to describe their murder as an Undignified Death, mainly by making their victims out to be cowards.

This is also a prime way to push the Relative Button. The exact opposite, on the other hand, is But for Me, It Was Tuesday, wherein the villain can't even remember who it was he killed, never mind how they died, which shows that they've killed so many that they stopped caring about it as well as Lack of Empathy.

Alternative Title(s): Would You Like To Know How They Died