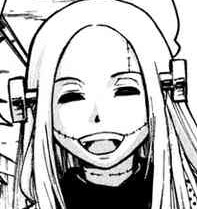 Ready for your operation?note No, you're not.
"Let's put a smile on that face!"
— The Joker, The Dark Knight
Advertisement:

When a character suddenly breaks into an ear-to-ear grin, it's a Cheshire Cat Grin. When this is permanently part of their facial structure, whether they're happy or not, it's a Glasgow Grin. It may have curlicues or stitches at the ends. This also happens a lot with puppets, intentionally or not.

Named, of course, after the Glasgow Smile, an act of violence (supposedly popular with Violent Glaswegians) in which a person's cheeks are sliced open starting at the edges of the mouth. Not all characters with a Glasgow Grin have been scarred; some of them were born with it. Generally, characters with Glasgow Grins tend to be evil, insane, or both. If it is a protagonist character who is not a villain, it also just shows that they are a somewhat dark character. It's sometimes known as a Chelsea Smile, in reference to the London football team, whose more violent fans were reputed to inflict it on people as a Finishing Move, or as a Traveller's Smile, also called "sourire de l'ange" (the angel's smile) in French.

Compare with Cheshire Cat Grin and Slasher Smile. Contrast Perpetual Frowner. An inversion is Mouth Stitched Shut. Sub-Trope of Facial Horror. Not to be confused with the "Glasgow Kiss".