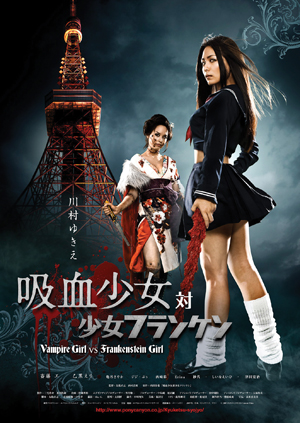 "What can a high school student like me do in a crazy battle between crazy monsters?"
— Jyugon
Advertisement:

A Japanese gorntastic romantic horror comedy from the year 2009, directed by Yoshihiro Nishimura and Naoyuki Tomomatsu.

It follows the the Ordinary High-School Student Jyugon, who finds himself caught in the middle of a Love Triangle between the vampire Monami and (after the halfway-point) Frankensteinian Keiko.

In this crossfire of love we find: