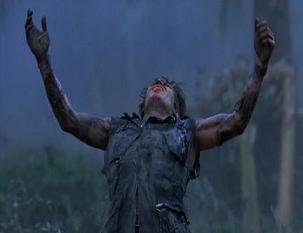 "And you stare at me in your Jesus Christ pose
Arms held out like you've been carrying a load."
— Soundgarden, "Jesus Christ Pose"
Advertisement:

It's very common for a character who just performed a Heroic Sacrifice to be lying with their arms outstretched like the crucified Jesus. The "person with outstretched arms symbolically representing Christ" pose is so deeply ingrained into modern culture that anytime we see a character in that pose, we tend to assume the director was going for this trope, even when it's obvious from the context of the scene that he or she wasn't.

Note that characters who stand with outstretched arms aren't necessarily meant to represent this pose; they can also symbolise bird wings, in the sense of freedom. Or angel wings, as a mix of both.

A Sub-Trope of Rule of Symbolism (unless an example is Faux Symbolism) and Crucial Cross.

The bliblies have overrun the Smiling Friends office, and Alan suffers their wrath via blasphemous imagery.

The bliblies have overrun the Smiling Friends office, and Alan suffers their wrath via blasphemous imagery.