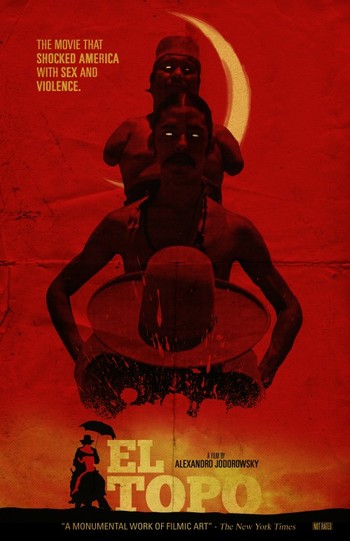 "I am laid low in the dust of death."
The desert is a circle. To find them, we must travel in a spiral.
— El Topo
Advertisement:

El Topo is a Spanish-language acid Western written, directed by and starring Alejandro Jodorowsky. It combines the violence and gunplay traditionally associated with the Western with Jodorowsky's obsession with mysticism and The Occult. It's also intended to evoke a similar reaction to a psychedelic experience (Jodorowsky occasionally fed acid to his actors before filming) so that may explain some of the odder elements in the plot.

The movie is divided in three parts. During the first part, a gunslinger known as El Topo (who travels with his naked 7 year old son) murders a group of bandits in revenge for the massacre of an entire village. The bandits are strangely dressed, degenerate and led by a fat, balding Colonel. In the process, he liberates a woman he calls Mara (who the bandit leader was using as a slave). El Topo falls in love with Mara and rides off with her, abandoning his son at the monastery the bandits had occupied.

In the second part, Mara convinces El Topo that before she can love him he will need to be the best gunfighter in the world. In order to do so, he needs to find and kill four Great Masters who live in the desert. With the aid of a semi topless woman who speaks with a man's voice (see above re: LSD) El Topo tracks down the four Masters and kills them all by means of tricks. Once he has killed them all, the mysterious woman shoots him, seduces Mara, and leaves him to die.

The third part begins with El Topo awaking in an underground cavern filled with deformed people, who believe he is some kind of god. He discovers they're trapped in the cavern, and their deformities are the result of inbreeding. After sucking on a psychedelic beetle (see above re: the LSD, again) and undergoing a symbolic rebirth (ummm... never mind, you probably get it by now) El Topo volunteers to dig a tunnel out of the mountain and in the process falls in love with a dwarf girl and destroys America, or at least Capitalist Amerika.