Film / The Theory of Everything 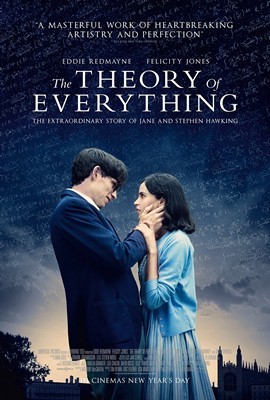 The Theory of Everything is a 2014 Biopic about the life of Professor Stephen Hawking, from his years as a student at Cambridge to his diagnosis of amyotrophic lateral sclerosis (ALS) to the publishing of his book, A Brief History of Time. It is based on the book Traveling to Infinity: My Life with Stephen, written by Stephen's first wife Jane Wilde Hawking, who is played by Felicity Jones in the film.

The film garnered much praise, most directed to Eddie Redmayne's performance as Stephen which earned him the Academy Award for Best Actor.

See also Hawking, another biopic of Hawking, which was televised.