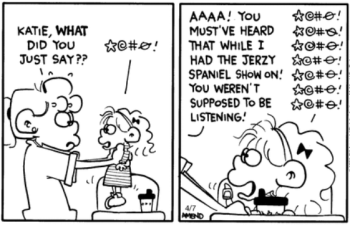 Mrs. Read: Well, you're off the hook this time because you didn't know what you were saying. But I hope you know now that swear words are not appropriate things to say, especially for three and four year old children.
D.W.: Why?
Mrs. Read: Because most people are offended by them. It's as simple as that.
D.W.: But why? What do they mean?
Mrs. Read: I guess you could say they mean "I want to hurt your feelings".
— Arthur, from the end of the episode "Bleep"
Advertisement:

When someone uses a naughty word without realizing it's a naughty word. Quite often, the person (almost always a child) will get into a lot of trouble for using such a bad word without knowing the meaning of the word or what he or she has done wrong.

Related to Entendre Failure. Can lead to a Swear Word Plot about how the word is offensive and shouldn't be used. Compare Fee Fi Faux Pas. Compare Innocent Bigot if it is a racial slur that a child/children say without knowing the meaning of such words. Truth in Television for kids who are very young or very sheltered. See also Fowl-Mouthed Parrot if the one doing the swearing is an animal.

Well to be fair, this IS Ned Flanders and his son we're talking about.

Well to be fair, this IS Ned Flanders and his son we're talking about.