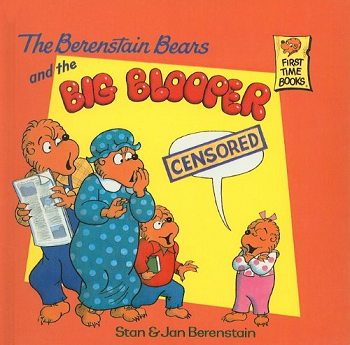 Everybody hears curse words at some point, but clearly there are some times when it's less acceptable to curse than others. To help illustrate this point to children, television shows will often dedicate an entire episode to a character (if not the main character, usually a young sibling or friend- most often a toddler or baby) learning a bad word, using it throughout the episode (possibly without realizing what it means) until an older person delivers An Aesop about what the word means and why it's inappropriate. This is a little difficult on a kid's show since you can't say the dirty word, so expect a lot of censor bleeping (or some well-timed Sound Effect Bleeps), a tamer expletive such as "stupid", or maybe a made up word like an alien word or slur in place of any specific curse word.

Rarely, shows made for adults will also have an episode about swearing. This allows them to use an actual swear word, as well as possibly deconstruct or parody the perceived inappropriateness of swearing. It also may revolve around a child learning a bad word, but from the perspective of the older folks of the family, figuring out how they learned the word (often confronting the person who said it around them). It could also focus on characters trying to swear less, which may involve a Swear Jar.