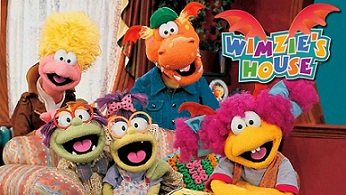 Once again - no, 90s kids, this wasn't some weird fever dream you had.
"Imagine a monster girl anime, only instead of being high school girls, it's about pre-school aged goblins, trolls, dragons, and birds. The premise of Wimzie's House is a little bizarre - why are these vastly different, mostly imaginary species all living together? How did a bird and a dragon manage to reproduce and why are they all the same size?"
— Ranker's list of "The Strangest Puppet-Based Kids' Shows From the '90s"

Wimzie's House is a Canadian preschool puppet series that ran for 65 episodesnote 112 episodes were originally produced for the series, but only a select 65 of them were broadcasted in many television markets, especially in the U.S. from 1995-1996 on YTV, and aired on PBS stations through distribution by Maryland Public Television in the US from September 1, 1997 until January 3, 2003.

The show was about a 5 year old dragon-bird girl named Wimzie whose parents worked all day, so her grandma Yaya ran a mini daycare center. The charges of the daycare are Wimzie, her 18 month old brother Bo, a 5 year old goblin named Jonas who loves science, his 3 year old sister Loulou who loves to be with the bigger kids, and a 4 year old ogre named Horace who isn't very bright.

In each episode they learn lessons and flip over to semi-related songs out of the blue twice an episode. As a bonus, the songs are presented in letterbox widescreen; the show is presented in 4:3 full-screen. (Though not always.)

In 1999, The Jim Henson Company issued a lawsuit against the company, claiming the characters looked too much like Muppets (despite the fact that a number of Henson people, including puppet builder Jim Kroupa, worked on this series), though an Urban Legend has surrounded the lawsuit for years that the real reason behind the lawsuit was because they didn't want to be connected to what they considered to be an inferior show.