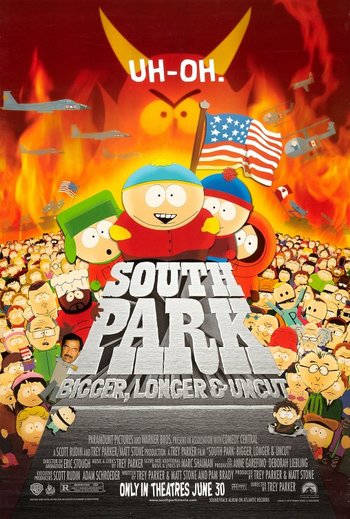 Uh-oh.
Sheila Broflovski: "Times have changed!
Our kids are getting worse!
They won’t obey their parents,
They just want to fart and curse!"
Sharon Marsh: "Should we blame the government?"
Liane Cartman: "Or blame society?"
Randy, Gerald, & Stuart: "Or should we blame the images on TV?"
Sheila: "No! Blame Canada!"
— The Oscar-nominated song, "Blame Canada", demonstrating the uselessness and scapegoating of South Park's adults.
Advertisement:

South Park: Bigger, Longer & Uncut—The Movie of that famous cartoon about the foulmouthed fourth graders (third graders at the time)—hit theaters in summer 1999, less than two years after the show's premiere, making it one of the fastest TV-to-film adaptations in history.

Cartman, Kenny, Kyle and Stan sneak into a Sunday morning screening of Asses of Fire, a new film starring their favorite Canadian comedians, Terrance and Philip. The epic number of obscenities they take from the film (and quickly spread to the other kids at school) causes all sorts of trouble; before too long, the parents of South Park, led by Kyle's mother Sheila Broflovski, go on the Moral Guardian warpath. Their culture war eventually results in the arrest of Terrance and Phillip, which starts an actual war between Canada and America. The American government plans to execute Terrance and Philip during a USO show...which would allow Satan to rise up and cause The End of the World as We Know It. The world's only hope for salvation? You guessed it: Cartman, Kenny, Kyle and Stan.

While vulgar and patently offensive (it received a Guinness World Record for most profanity in an animated feature—399) it's notable for being just plain laugh-out-loud funny, and the terrific original tunes—including "Blame Canada", "Mountain Town", "Uncle Fucka" and "What Would Brian Boitano Do?"—certainly help in that regard.

Uncut was a critical and commercial hit, holding the highest-grossing adult animated movie until The Simpsons Movie in 2007. It is one of only three R-rated animated films to receive any form of recognition from the Academy of Arts and Sciences, the other two being Waltz with Bashir (2008; nominated for Best Foreign Language Film) and Anomalisa (2015; nominated for Best Animated Feature). "Blame Canada" was nominated for Best Original Song, losing to Phil Collins' "You'll Be in My Heart" from Disney's Tarzan, a loss that Trey Parker did not take lightly).

He'd make a list of tropes for you — that's what Brian Boitano'd do!

After Saddam Hussein interrupts the hologram signal from hell, the general infamously yells in anger "Fucking Windows 98!" before demanding to see Bill Gates.

After Saddam Hussein interrupts the hologram signal from hell, the general infamously yells in anger "Fucking Windows 98!" before demanding to see Bill Gates.