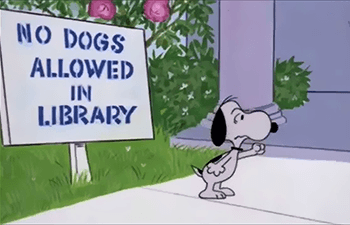 No pets allowed. A common saying of many establishments from hotels, to restaurants to office spaces. For whatever reason, the pets or just animals in general, are denied entry to a particular setting and are forced to look elsewhere at best or recognize they don't belong at worst. In most cases, while the human or superior race can access facilities with ease, pets are barred access for a multitude of reasons.

A sub-trope of Can't You Read the Sign? that applies specifically to this conflict. Usually Played for Laughs but sometimes can be used for drama should a character be very attached to their pet. In some cases, it can be an allegory for civil rights and being wrongfully barred from places of attendance based on appearances. An example includes the racist spin "No Blacks, No Dogs, No Irish" which uses the label of "dog" as a slang for inferiors and undesirables, though this has become heavily outdated. Often the characters will choose to overcome these barriers, but sometimes the characters realize it's simply too much trouble.

In fantasy and science fiction, in universe, this can be upended as humans are not always a dominant race. It can be inverted to great effect with some animals barring other animals from being admitted, or more humorously, barring humans. Should aliens or other humanoids exist in the story, depending on the level of intelligence and the degree of interspecies conflict, this trope can apply in specific circumstances.

There is some Truth in Television behind this, as pets tend to unleash chaos in the form of causing damage, disrupting settings, distracting people and of course leaving...droppings. From a human perspective, there is little to stop this idea from existing as it's simply too much to deal with animals on a frequent basis. That said, there are exceptions including the valid utilization of service animals. There may exist plenty of real life examples to draw from but No Real Life Examples, Please!.