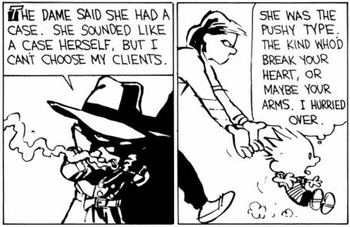 An episode that parodies or homages Film Noir, in a series that otherwise doesn't. Will almost always be Deliberately Monochrome and feature a Private Eye Monologue, and may contrive a way to get characters into period costume; other noir tropes might or might not appear. In long-running series, often used in the manner of a sorbet, to cleanse the audience's palate after numerous high-octane episodes.

Sub-Trope of Formula-Breaking Episode, and arguably a form of Out-of-Genre Experience. If the noir elements occur in a dream sequence or other alternate reality, it's also a Costumer. Compare Heist Episode, which usually involves robbery.