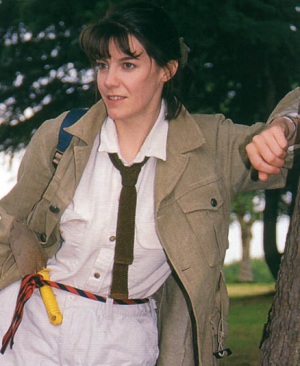 Bernice Summerfield is a long-running franchise about the titular interstellar archaeologist from 2540, whose adventures take place across hundreds of books, audio plays and other media. The series originated in the Doctor Who Expanded Universe and still takes place in the world of Doctor Who.

Benny was originally created by Paul Cornell (known best for "Human Nature"/"The Family of Blood") in 1992, as a companion to the Seventh and Eighth Doctors in the Doctor Who New Adventures novels. When Virgin Publishing lost their license to release Doctor Who novels, they continued their line (now called just New Adventures) around Benny's solo career.

The series focuses on classic adventure as well as the relationships between its characters. Benny travels across the universe to right wrongs, explore new planets, and prevent the end of the world on many occasions. Joining her are her ex-husband Jason Kane, her friend Bev, her son Peter, a Time Lord named Irving Braxiatel, and many other friends and adversaries. And unlike the Classic Doctor Who TV series, the Bernice Summerfield range tends to deal with very mature themes. The stories don't shy away from war, torture and death, as well as celebrating love and sex (Benny being from an almost Free-Love Future) and showing relationships in a realistic way.

In addition to the New Adventures novels, Bernice has an audio series produced by Big Finish. The Audio Play series started with loose adaptations of Benny's existing novels and became a full-fledged range of original stories and new novels after its first season, frequently intersecting with other Big Finish Doctor Who ranges. It's been going strong since 1999.

Benny's video appearances include the CGI webcast "Dead and Buried", the live-action short film "The Crystal Conundrum" (alongside the Seventh Doctor) and Big Finish video trailers.

With the division between "classic" and "new" Who being gradually erased in the 2010s, Bernice is now also free to meet the modern Doctors, starting with an appearance alongside the Twelfth Doctor in the 2015 novel Big Bang Generation.

All in all, the Bernice Summerfield series has quite a few Broad Strokes, and can be approached from a wide variety of starting points. It is one of the Doctor Who Expanded Universe's most successful spinoffs, and the longest-running one if you're not picky about which medium it's in.

For recaps of the audio episodes, see the Big Finish Doctor Who page.

As of December 2020 the audio releases up to Series 6 are available as downloads.