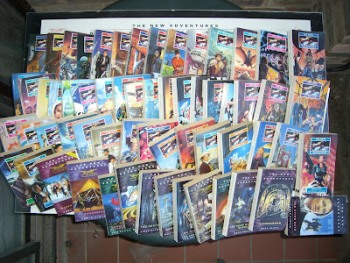 "Full-length science fiction novels, stories too broad and too deep for the small screen."
Advertisement:

After the BBC ended production of Doctor Who in 1989, the editor in charge of the Doctor Who Novelisations, Peter Darvill-Evans, realised he had access to loads of enthusiastic writers but but was running out of serials to novelise, so he had the clever idea to ask for a licence to write new, original novels about the Doctor. Running from 1991 to 1997, this series of 61 novels focused on the continuing adventures of the manipulative Seventh Doctor and his companions. The series was released by Virgin Books and was given the umbrella title of "The New Adventures".

The Seventh Doctor initially travelled only with Ace, his companion at the time of the show's cancellation. They were soon joined by Bernice Summerfield, Adventurer Archaeologist, a more stable and experienced character compared to Ace, who allowed for greater Character Development. Other new companions included Roz Forrester and Chris Cwej, Salt and Pepper police detectives from the 30th century. Bernice (or Benny for short) became a Breakout Character and eventually got more spinoffs than can be sensibly listed, the most well-known of which is her own ongoing Big Finish audio series.

The ability to tell a story in 300 pages with an effectively unlimited "special effects budget" allowed the writers to provide deeper, more thought out stories along with more than a few story arcs, both universal and character-based. The novels were deliberately aimed at adult readers, rather than the family-friendly aim of the TV series, and did not shy away from depicting sex and violence. The stories expanded upon the Seventh Doctor's penchant for playing people-chess with both enemies and friends, and gave it realistic consequences.

From 1994 onwards, the New Adventures were accompanied by a sister range of novels entitled "The Missing Adventures", which adopted similar principles to the New Adventures: longer, usually Darker and Edgier novels aimed at more adult audiences. This series included Doctors One to Six, with each monthly novel starring a different Doctor and companion(s). The first of these, Goth Opera, was a direct sequel/prequel (let's just say "timey-wimey" and leave it at that, yeah?) to Blood Harvest, a New Adventure published the same month. One of the later ones actually featured the Seventh Doctor and his companions appearing (both of these novels, curiously enough, starred the Fifth Doctor), but they were for the most part stand-alone, although certain characters and concepts naturally mixed together.

In 1997, the success of the TV movie in the UK resulted in the BBC taking their licence for original Doctor Who fiction in-house, meaning the end of New Adventures starring the Doctor. BBC books began the Eighth Doctor Adventures, which took the principles started here and just went ballistic applying them to the relatively blank slate that was the Eighth Doctor. However, the New Adventures continued as novels starring Bernice Summerfield until the end of 1999.

Several early Big Finish Doctor Who episodes, sometimes marked "Side Step", take place in the New Adventures continuity. In 2012, they began adapting pre-existing novels (from this and the Doctor Who Missing Adventures) to audio too, beginning with Paul Cornell's "Love And War". Then, in 2018, they brought the whole series full circle by announcing new New Adventures, bringing back Yasmin Bannerman and Travis Oliver as Roz and Chris to write new and original stories set in the NA era.

It's impossible to overstate the importance of the New Adventures. They were the only period in the series' history when a spinoff medium was considered the "real" Doctor Whonote In time, the franchise would splinter, first with the comics breaking away from the Virgin books, then the TV Movie led to the Eighth Doctor Adventures and Big Finish having two mutually exclusive versions of the Eighth Doctor, all of whom various factions of the fandom considered the "real" Doctor Who until the series returned to TV., and brought in a whole generation of creative figures that are still around today. When the TV series was revived, it took plenty of cues from the New Adventures. Russell T Davies recruited several notable New Adventures writers that also had television-writing experience - in fact, every writer in the first series was also a Virgin veteran (with the exception of Robert Shearman, who was a playwright and Big Finish writer). One story in particular, Human Nature, was adapted for television by writer Paul Cornell (becoming the only pre-existing story to ever be directly adapted for television).

Recap page is here, but it needs a lot of filling in.