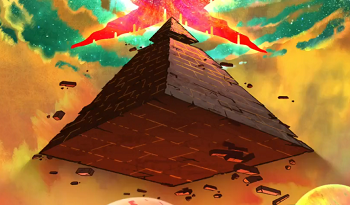 There's fear amidst the Fearamid...
Advertisement:

In the distant past, many civilizations built pyramids as monuments. The most famous are those of Egypt, followed by the Mayan pyramids in Mexico. They have also been found in Sudan, Iran, and China. The reason for the pyramid shape is quite simple and practical - 80% of a pyramid's mass is in the lower half, meaning that it is the most practical shape to support a large building. It's the form of stone building most likely to still be standing in a recognizable shape when the archaeologists show up a thousand years later.

However, due to a mixture of the distinctive geometrical shape and the immense labor required to build them, a lot of people have assumed there must be some special significance to the shape. Or that they were built by aliens, because they think people with Bronze Age tools could not have designed such accurately geometric monuments. Predictably, this also shows up in fiction. During the 70s there was an actual fad about the pyramids serving as a focus of cosmic energies ('pyramid power') and that resting in houses or boxes shaped like them could grant many physical and mental benefits. And sharpen razor blades.

There is also the incorrect belief that the Egyptian Pyramids were built by slaves. In actuality they were most likely built by volunteers who believed that, by participating in the creation of the Pyramids, they can get a share of the Pharaoh's luxurious afterlife, sometimes working along with native Egyptian peasants who had no work to do during the Nile's flood season; they may have been press-ganged into it, but it's just as likely that they were enticed with offers of food (grain, veggies, and beef) and beer in exchange for their labor (the invention of currency was still 2,000 years in the future, so that was the equivalent of paying wages). They also could have been conscripted peasants, like the corvée of pre-Revolutionary France or the Czech Robot.note Read: peasants without animals don't really have much to do a good part of the year, so the government/nobles would use them for (unpaid) labor; this is how most pre-modern civil public works were built (though some societies, like the Romans, often used soldiers instead, especially if the works had military uses). Some do consider it a "lesser form" of slavery, but it was rarely seen that way at the time, and it is perhaps more useful to think of it as a form of in-kind taxation (particularly in societies like Ancient Egypt that hadn't invented money, or at least didn't use it for much other than foreign trade). Yes, the word 'robot' does come from the Czech Robot. It was still quite a feat of engineering, organization, and patience, but not necessarily the result of blood-soaked tyranny Hollywood History would present. Not related to the other kind of pyramid of power, or the pyramid used by the Illuminati, or the pyramid that offers cash, or the other kind of pyramid that offers money.