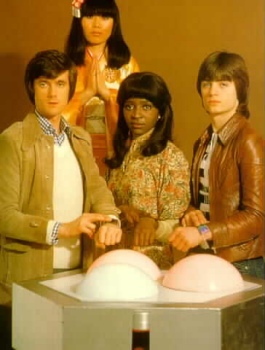 1970s British Speculative Fiction series created by Roger Damon Price, who also created You Can't Do That on Television. The Tomorrow People followed the adventures of a group of Homo superior, the next stage in human evolution. The titular Tomorrow People were an ensemble of three to five children and young adults born with special powers, primarily telepathy and the ability to teleport or "jaunt". Using these abilities, the Tomorrow People fought to protect Earth from home-grown and extraterrestrial menaces, while keeping their own existence secret from world governments that would misuse their powers, awaiting the day when they could (very politely and bloodlessly) take control of the world away from the "saps" (short for Homo sapiens).

It is almost impossible to discuss The Tomorrow People without comparing it to Classic Doctor Who, to which it was, essentially, ITV's answer.note Primeval being their weapon against the new Doctor Who series.

Starting in the third season, the team often traveled to other worlds (played by the BBC Quarry through a sepia filter) on missions for the Galactic Federation, an interstellar alliance of telepathic species.

The Tomorrow People was revived in the mid 90's with the help of Nickelodeon for three seasons. During the Turn of the Millennium, Big Finish produced a series of The Tomorrow People audio dramas, reuniting many of the original cast members. The audio series has now concluded, although yet another revival (which is Hotter and Sexier than its past incarnations) came about on The CW, but lasted just a season. It has its own page now.