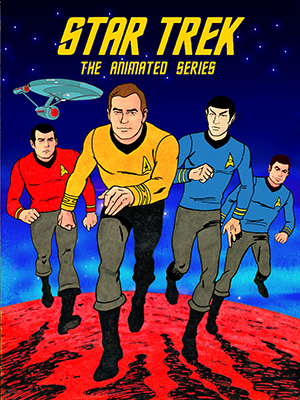 Star Trek: The Animated Series is an Animated Adaptation and the first Spin-Off from the original series, continuing the initial five-year mission.

Given the reality that it was produced by Filmation, the animation is typically the studio's ultra-cheap style. However, they more than made up for that with the presence of all of the original cast except Walter Koenig (Chekov), and the writers as well. The result is a show that might not have had the best animation, but still boasts spectacular imagery and believably non-human aliens that the original show could never depict, while still reasonably keeping to its artistic spirit. As a result, this series is the best example of the Animated Adaptation concept in The Dark Age of Animation, and was so good that it won the franchise's first ever Emmy Award.

The Animated Series remains the shortest-lived series of the Star Trek franchise, with just 22 episodes airing over a 13-month period in 1973-74 on NBC. It was also the last Trek series to air in first-run on network television until Star Trek: Voyager debuted in 1995 on UPN. The franchise would not return to the medium of animation again until the release of Star Trek: Lower Decks in 2020.

However, the franchise creator, Gene Roddenberry, later insisted that the animated show be kept out of continuity since he never anticipated that Star Trek would later be revived in live action on such a scale as would happen, with the film series and The Next Generation. Still, many fans insisted that at least the best episode, "Yesteryear", be counted, considering that it gives a valuable look into Spock's youth and character as well as the planet Vulcan, as told by the most authoritative voice on the matter, D.C. Fontana. Because of the information about Vulcan presented in the show, as well as the introduction of the Holodeck and Kirk's middle name, and the fact that many of the Star Trek writers and actors were involved with the production, many fans consider it a part of their personal Star Trek canon, depicting the final two years of Enterprise's five year mission. In addition, the producers of Star Trek: Enterprise used numerous references from this series. The Star Trek Expanded Universe, already having less of a need to adhere to strict canon, even went so far as to revive the series' Sixth Ranger alien crew members, Cat Girl Lt. M'Ress and tri-symmetrical Lt. Arex.

CBS declared this series full canon around the time they released it on DVD.

The title used here and on the DVD release is a retronym, as the show originally aired as simply Star Trek. It's also known by the more ponderous title of The Animated Adventures of Gene Roddenberry's Star Trek.

In the Star Trek: Logical Thinking video on the Ad Hominem fallacy, Sulu and Arex are prejudiced against Klingons because one killed their friend.

In the Star Trek: Logical Thinking video on the Ad Hominem fallacy, Sulu and Arex are prejudiced against Klingons because one killed their friend.