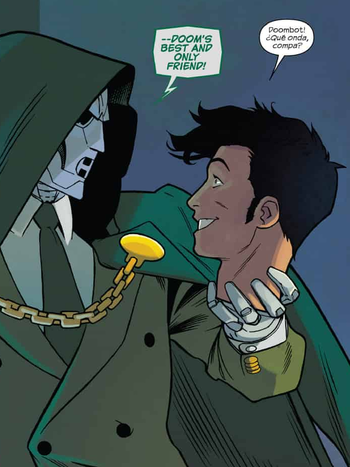 "In Evil Within, you can get beheaded, and continue to play the game. I mean it's pretty cool that you can get beheaded in the game, and that's usually a death, like it usually kills you. But there are times, when it will not, and you just continue playing the game. It's particulary funny because, if like it starts to happen where you get beheaded again, it doesn't like, kill you like you don't have a head it's like, no, no head, blade can't do that, no head, stay alive."
— gameranx
Advertisement:

A beheading can be a messy and extremely painful thing to see, let alone experience. While it's been said that, theoretically (it's understandably hard to confirm), consciousness may continue for a few seconds after decapitation, note It has been shown that random brain activity can continue for many minutes, ending in a flurry of activity reminiscent of a brain seizure. in fiction, consciousness after decapitation can last much, much longer... or even indefinitely. The severed head generally possesses the ability to audibly speak despite their mouth no longer being connected to their lungs, and may or may not even be capable of independent movement, either by bouncing, rolling or levitating. Sometimes the body will still be functional and capable of moving on its own, resulting in the head trying to tell it to pick it up and reattach it.

This trope can be justified for robots, which may have a power source in their skull that keeps them going after it's been separated from their shoulders: they may not have their core processor in their head anyway. The Undead and other supernatural beings may also exhibit an ability to have a functioning head separate from their still-functioning body. Robots could also have their entire vocal system located in their head, but any biological creature should only be able to mouth words.

When multiple heads/brains/souls/CPUs/etc. are removed and then reinstalled in working order at the same time, this will almost always result in them being "returned" to the wrong bodies, giving a Visceral "Freaky Friday" Flip.

See: Alas, Poor Yorick, Brain in a Jar, Helping Hands, Your Head A-Splode, Cranial Processing Unit, Detachment Combat, Oracular Head. Related to Headless Horseman, Pulling Themselves Together, Appendage Assimilation, and Having a Heart. Contrast Decapitation Required, when it's the only way to kill them successfully. For decapitation in general, see Off with His Head!. Not to be confused with Talking Heads, which is a stylistic convention.

Fender end up losing his head because he's lost the bolt that keeps it in place after falling down due to a failed attempt at stealing Rodney's foot. He tries to pick it up but keeps accidentally kicking it away.

Fender end up losing his head because he's lost the bolt that keeps it in place after falling down due to a failed attempt at stealing Rodney's foot. He tries to pick it up but keeps accidentally kicking it away.