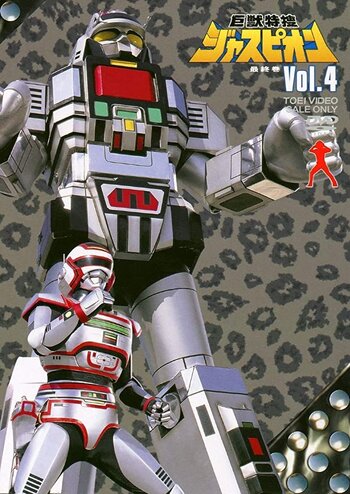 Kyojuu Tokusou Juspion ("Megabeast Investigator Juspion") is the fourth in the Metal Heroes series of Tokusatsu shows. It is extremely popular in Brazil due to it being broadcast there in the '80s. The series revolves around space orphan Juspion and his eccentric android assistant Anri, who are sent by old wizard/scientist Ejin to destroy Satangorth and his army of Megabeasts (kyojuu), as prophesied in The Galaxy Bible. He has a giant robot at his disposal and is followed around by Team Pet Miya.

Got a Bluray release stateside in 2019 courtesy of Discotek Media as part of their foray into tokusatsu. In 2020 it became streamable on Crunchyroll as well as free streaming service Midnight Pulp

. Select episodes were also uploaded to the Bandai Spirits

Youtube channel to promote the release of Soul of Chogokin version of Daileon.