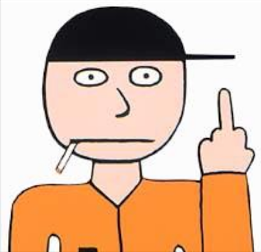 Kevin Spencer (1998-2005) was a Canadian animated series that aired on The Comedy Network and was based on an online Flash cartoon created by Mondo Media in the late 90s. Kevin was a silent, sociopathic juvenile delinquent who was born without the ability to feel emotions, was addicted to cough syrup and cigarettes, and spoke to an imaginary friend, Allen the Magic Goose, who always gave him horrible advice. His parents were fat, abusive alcoholics, who spent most of their time swearing at each other and committing illegal acts. Very dark and cynical, the show made light of the Canadian justice system and the nation's disadvantaged.

With its simplistic art style (and in season one, narration), season one played out like someone narrating a very twisted children's book. The second season altered this to present-day storytelling with less narration (the narrator would tell the audience what Kevin "says", as well as explaining certain plot elements to the audience), constant swearing (including an uncensored "fuck"), and full half-hour episodes. The stories were often vulgar and crass with low-brow humor, but would jump into philosophical, intelligent and surrealistic events.

Kevin is smart as he is talkative.

Kevin is smart as he is talkative.