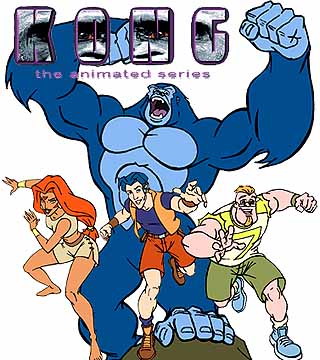 Kong and his human friends. Left to right: Lua, Jason and Tann.
Advertisement:

Kong is a genetically-engineered gorilla created by Dr. Lorna Jenkins using D.N.A. from the original King Kong as well as her grandson Jason. Jason's teacher, Ramon De la Porta, learns about the magical Primal Stones kept on Kong Island and tries to steal them to become all-powerful, but in the process awakens the demonic being Chiros the Destroyer. Jason and Kong charge themselves with getting the stones back before Chiros can fully escape, Jason using a special earpiece, the Cyberlink, to combine into one being with Kong to make him more of a match against monsters of De la Porta's creation. The two are also helped by Jason's hulking but jovial friend Tann and Lua, a shaman from Kong Island who knows the most about the powers of the Primal Stones.

The entire series is officially and freely available on YouTube here

, and on Tubi here

, with King of Atlantis being in its own listing here

Not to be confused with The King Kong Show, which has no connections to this series aside from the use of Kong and being an In Name Only adaptation.