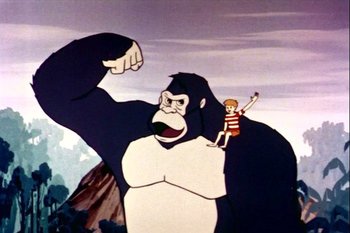 The third television series to be produced by Videocraft (later known as Rankin/Bass Productions), with help from Japanese animation studio Toei Animation, in one of the latter's earliest works. This series, very loosely based off the iconic giant gorilla, ran on ABC as a Saturday Morning Cartoon from 1966 to 1969.

In this series, Professor Bond (no, not that Bond) lands in the fictional island of Mondo Island, presumably an Expy setting of Skull Island, with his son and daughter, Bobby and Susan. As the family gets a sense of their surroundings, Bobby gets lost and ends up running into a Tyrannosaurus rex that nearly eats him. Just as the situation seems hopeless, Kong, the 8th Wonder of the World shows up and rescues the boy from certain death. Bobby and Kong soon befriend each other and the family soon relies on him to protect themselves, and the island, from various threats.

The King Kong Show has almost nothing to do with the 1933 film and its plot, aside from the use of Kong and an island setting. All other characters were created strictly for the series (well, almost, read below for more on that) and do not appear in any other Kong material. The later two animated series based on the Kong universe, Kong: The Animated Series and its Spiritual Successor, Kong: King of the Apes, follow a very similar formula as this series, but are set in a more modern/futuristic timeline.

The series was originally broadcast in three segments, with the first and the third segments containing Kong episodes. The second segment is for a seperate series, Tom Of T.H.U.M.B. This segment has a tiny secret agent named Tom, working with his Asian sidekick Swinging Jack, stopping various evil plots across the globe.

The show is notable for introducing Mechani-Kong (spelled Mechanikong in the series), Kong's robot duplicate, and the main antagonist Dr. Who (No, not that Dr. Who; that's not even that character's name, for one), who would both become the main antagonists of King Kong Escapes, envisioned originally as a co-production between Toho and Rankin-Bass.