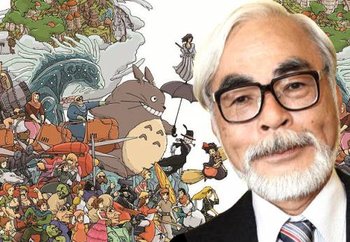 "In order to grow your audience, you must betray their expectations."
Advertisement:

Hayao Miyazaki (宮崎駿) (born January 5, 1941) is both the co-founder of Studio Ghibli and the single most successful and renowned animator in Japan since Osamu Tezuka (which also makes him the most famous Japanese animator worldwide).

Miyazaki's father and uncle owned a large airplane factory, and as a child, Miyazaki mostly drew airplanes when he first learned how to draw; the influences of growing up around flying machines have resonated throughout his work since.

He named The Snow Queen (1957) as one of his favorite films and one of his biggest influences to keep him in the animation industry.

He began his career in the early-'60s at Toei, but came to prominence writing and directing anime for television in the '70s, including several episodes of the Lupin III: Part 1 TV series. This led to his first feature film work as director of an action-adventure caper flick starring the Lupin characters: The Castle of Cagliostro (which, despite its liberties with the characters, has become an acknowledged classic for both the Lupin franchise and Miyazaki). In addition to his early writing and directing work, he also lent his artistic talents to numerous anime series during this time by providing (among other things) storyboards, scene design, organisation, and occasional key animation for the early entries into the World Masterpiece Theater series.

In 1984, Miyazaki and producer Isao Takahata scraped together a staff and enough financial support to make a feature film: Nausicaä of the Valley of the Wind, based on a Miyazaki-penned manga. The film's success allowed Miyazaki and Takahata to set up their own studio — Ghibli — which became their base of operations from then onwards.

One indicator of the stature and craftmanship of Miyazaki comes from who licenses his films in the United States: Disney paid exorbitant amounts of money to become the exclusive distributor of his works in English on his terms. Nausicaa suffered a Macekre (Warriors of the Wind) that completely missed the point of the film; when he heard that Miramax would alter Princess Mononoke for American audiences, he allegedly sent the American-language version's producers a katana with a two-word note attached: "No cuts".

Miyazaki has gained notoriety for vocalizing his beliefs regardless of whom he might offend, which makes him a unique case of an executive who goes by his word. He didn't accept his 2003 Academy Award in person because America had gone to war with Iraq and he had refused to travel to the US. He also considers himself a feminist, which should make it no big surprise that nearly all of his films feature female main characters. Though it should be noted that he left his wife, Akemi Ota - a promising animator in her own right - to raise their two sons alone at the expense of her career, despite promising that she would not have to stop working. He doesn't keep in touch in high-tech gadgets and consumer products; only his most popular titles have CG elements in them, and he later shut down Ghibli's entire CG department. (Recently, however, he has said that whether hand-drawn animation or CGI is used is not as important as the talent of the person doing the animation.) He has also openly criticized high-tech materialistic societies (he once compared the iPad to "masturbation"

) and has criticized the modern anime industry for being overrun by Otaku, who "don't spend time watching real people" and are "humans who can't stand looking at other humans."

Miyazaki currently stands alone as the only anime director recognized by Hollywood's highest honor, the Academy Award. His 2001 film Spirited Away won the Oscar for Best Animated Feature Film in 2003, improbably defeating both Ice Age and Disney's own Lilo & Stitch. The film's unprecedented — and unexpected — Oscar win caused Disney to widen the film's theatrical release for a few weeks prior to the film's DVD release; both film critics and fans of animation (Japanese or otherwise) heaped praise upon the film. (Miyazaki received a nomination for the same award in 2006 with Howl's Moving Castle and in 2013 for The Wind Rises.)

He dislikes the simplicity of Black-and-White Morality (i.e. "good vs. evil"); he generally eschews this approach by placing both sides in the grey. Exceptions to this rule include Nausicaä of the Valley of the Windnote and even there, the manga is very much grey and Nausicaa is portrayed as not necessarily being in the right and especially Castle in the Sky.

Has teased retirement since 1997, only to defy himself every couple of years with the announcement of a new film, to the point that Miyazaki announcing that each new film will be his "last one" has become a running gag among fans. As of this writing, he is currently working on his follow-up

to his most recent "last" film, The Wind Rises, as well as a manga and a ten-minute long computer animated short

, a break from his usual disdain of digital technology.

His older son, Goro Miyazaki, is an animator and director who also works at Studio Ghibli. However, their relationship is somewhat strained since Hayao Miyazaki spends most of his time working for Ghibli and being an absent father to his family which disillusioned Goro a lot, as evident where Goro directed Tales from Earthsea, which shows his bitter feelings towards his father. Even during the production of From Up on Poppy Hill, things were tense due to their creative differences. Despite this, Hayao Miyazaki still displays some support to his son, as shown where he explains how even though his son doesn't understand how to be a director, it's OK for him to stop since it is not an easy job. He also added that he wanted Goro to try and tap in to his wisdom the production of From Up On Poppy Hill so he can change his vision and surely enough, the outcomes are positive enough that their relationship is mended a little.

He has his own fan-made religion

Hayao Miyazaki and his works provide examples of: