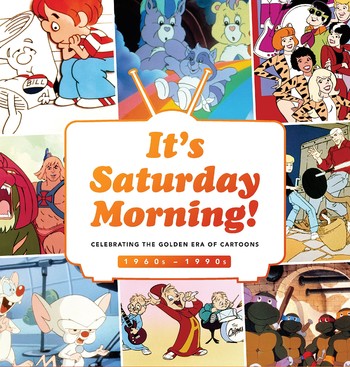 Clockwise from the top: Care Bears, Josie and the Pussycats, Jonny Quest, Teenage Mutant Ninja Turtles (1987), Alvin and the Chipmunks, Pinky and the Brain, He-Man and the Masters of the Universe (1983), School House Rock
"They might have been cheap, they might have been corny, and they might have been designed to just sell merchandise, but that does not take away how much they meant to the people who grew up with them. ... For many people across the world, they will never forget the joy that Saturday Morning Cartoons brought to them, and how important it was to their childhood: a simple time when all you needed was a bowl of cereal and your favorite cartoon."
— Sabersparknote The full quote and clip can be found on the Quotes page

If you're a kid these days and feel the urge to watch some cartoons, be they Anime or Western Animation, you don't have to wait. Cable and satellite TV offer a smorgasbord of animated options from Nickelodeon to Cartoon Network to Disney XD, which can be watched at any time. If none of these are to your liking, there's always On-Demand services, DVDs, and, of course, online streaming via Disney+, YouTube, Netflix, etc.

It wasn't always this way, as your family members who were born in the mid-20th century might tell you.

Back when televisions were rounded instead of flat, unseemly large and heavy, had antennae on top to pick up one of three or four networks or the local independent station(s) (and little knobs for which you physically had to go over to to change channels), getting your cartoon fix was a lot harder. The "Saturday-morning cartoon" format arose in The '60s as advertisers and networks realized the potential of an all-but-captive audience of schoolchildren who could camp out in front of the TV and veg out on three to four hours of animated goodness, enjoying a morning off from both school and church, while Mom and Dad were catching up on sleep lost during the work week.

This was an evolution of the "weekend matinee" blocks that movie theaters ran in the first half of the century, which ran back-to-back cartoons, serial cliffhangers, and news bulletins on a continuous loop throughout the day before the feature films proper were screened in the evening. One could attend for the price of a single ticket, arriving at any point in the cycle and leaving once one got back to where they started. Saturday mornings thus constantly saw cinemas packed with rowdy Free-Range Children... until TV arrived.

Limited Animation made it cost-effective for the networks to fill the entire time-frame this way, with the occasional live-action show here and there. Warner Bros.' Looney Tunes and other theatrical cartoon shorts, originally aimed at an adult audience, experienced a renaissance this way. (See also the Saturday Morning Kids Show.) It was a big deal: many networks would even devote a Prime Time evening slot in early fall to promoting their new Saturday morning lineup for the coming school year. As parents' groups began to flex their influence, the content of the shows began to become notoriously restricted until by The '80s they severely restricted the very basis of conflict and almost unconsciously attacked the value of individualism in favor of groupthink. Ironically, at the same time lax oversight of the commercial exploits corporations were engaging in led to a constant stream of "30-minute toy commercials," peppered with actual commercials promoting various other toys, candies and suger-laden cereals. In a more constructive direction, networks began commissioning educational spots of which the best were entertaining as well such as Schoolhouse Rock! for ABC, Ask NBC News for NBC, and In the News for CBS.

However, the format's decline began with the rise of cartoons produced to run in syndication (usually in short blocks aired before or after school hours and with more artistic freedom to be wilder than the TV networks dared to be), as well as the rise of cable networks like Nickelodeon and Cartoon Network that shared the same demographic. The advent of such video-on-demand streaming formats such as the aforementioned YouTube, Netflix and Hulu are likely what hammered in the final nail in the coffin for these blocks.

ABC, CBS, CW, and NBC affiliates have since acquired syndicated Saturday morning lineups dominated by Edutainment Shows (E/I), in order to be compliant with FCC regulations. ABC started this trend in the fall of 2011 when they ceased its Saturday Morning lineup and bought a syndicated block supplied by a distribution company, Litton. CBS and CW affiliates also began carrying Saturday E/I blocks, also supplied by Litton. Fox ceded their time to a two-hour block of infomercials that kids (and any adult 77 or younger) avoid like crazy, though some of their affiliates and O&Os have also bought up syndicated educational blocks. NBC was the last network to carry anything close to a traditional Saturday-morning block,note Ironically, it was the first network to drop cartoons from its lineup, in 1992. though in October of 2016, NBC discontinued this for a joint-venture Edutainment block with, once again, Litton. As it is, only Cartoon Network appeared to have a major showing on Saturday mornings, and even then, only action/superhero cartoons are shown. Nat Geo Wild also has a Saturday morning children's block, but it is educational and not all the programming is animated.

A bit of interesting trivia: In The '70s and '80s, Saturday-morning TV was a veritable cornucopia of cartoons, so many you had to pick which ones you wanted to see... however, just 24 hours later, Sunday morning was kind of frustrating for the kids who weren't church goers. Either the channels, across the board, would have programming so dull that kids wouldn't watch itnote this was where they dumped the crap adults didn't watch, either, and stations didn't want to be seen as encouraging children to stay home from church to watch TV or, if you were lucky, you got some Religious Edutainment show like Davey and Goliath, sometimes locally produced. The big networks, then and now, ran very grown-up news-and-politics Talk Shows on Sunday morning — This Week, Meet the Press, Face the Nation, and so on. If you were really lucky, you got an animated show or two — often religious in nature, unless you lived in a market with a station that carried The Funtastic World of Hanna-Barbera. It was a little better in Canada or with local syndication stations, although those tended to stick to Canadian-made cartoons like Rocket Robin Hood or Spider-Man (1967) on Sundays. The sole exceptions in most markets were USA Network's Cartoon Express block in the 1980s, which consisted mostly of reruns of various H-B, Ruby-Spears, DiC, and Filmation cartoons, and in the 1990s the first run of Nicktoons, which originally ran in the Sunday morning slot. Back in the early to mid 80s, Sunday morning syndication might run live action children's shows like Big Blue Marble. Also, some one shot and unsold cartoon pilots might make their way to the early sunday morning timeslot. These shows had a fair amount of viewers on the East Coast Tri State Area where a significant amount of the population is Jewish or otherwise has religious services on a day other than the traditional Christian sabbath. However, Sunday morning for many children of the 1960s, 1970s and 1980s was just a good time to play with your toys if you weren't taken to church services.

Many early Saturday-morning cartoons are closely associated with the Animation Age Ghetto. Many later ones were actually anime imported to the United States, Pokémon: The Series and Yu-Gi-Oh! being prime examples. The Japanese equivalent of the timeslot is Sunday mornings, and unlike in the west, is still going strong.

Other western countries during more or less the same epoch dedicated their weekend slots in a similar way Saturday being reserved for children's (and teenager's) programming, with in addition to the cartoons listed here locally produced ones, and Sunday depending of the channel for either religious programming or also for shows for children. As in US it began to fade away in the '90s being replaced by not-children related programming as news, reality shows and/or recaps of them, live-action series, etc and children-aimed program and series being moved to channels especialized on them.

In recent years, The CW discontinued Vortexx, the last traditional Saturday morning block, on September 27, 2014. Almost three years later, on July 1, 2017, the Sinclair Broadcasting Group launched a new program block called KidsClick, which was broadcast on This TV and Sinclair-owned stations. KidsClick aired seven days a week, including Saturday mornings and Sunday afternoons, thus becoming the first program block to air non-educational cartoons on weekdays since Kids' WB! discontinued their weekday blocks in 2001 and 2005. Unfortunately, Sinclair saw very little value in KidsClick and abruptly canned the block at the end of March 2019.

On the other hand, the past few years have seen Disney Channel running a very respectable Saturday morning animation block with such shows as Big Hero 6: The Series, DuckTales (2017), Amphibia, Big City Greens, and the Mickey Mouse (2013) shorts, as well as older series like Phineas and Ferb and Gravity Falls.

, aimed at all ages and intended to be a nostalgic throwback to the Saturday mornings of old.

For some off-the-net reading, check out Saturday Morning Fever: Growing Up with Cartoon Culture (1998), by Timothy Burke.