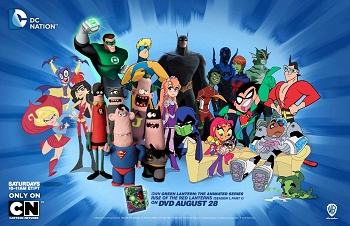 More humorous shorts about DC Comics characters than you can shake a stick at!
Advertisement:

DC Nation was a programming block aired on Cartoon Network between 2012-2014. As the name implies, the block consisted exclusively of material based on properties owned by DC Comics, Cartoon Network's sister company under Time Warner.

The block first consisted of:

Replacing them in summer 2013:

In fall 2013, Beware the Batman was replaced by a second rerun of Teen Titans Go!

In addition to the television programs, the block also showed numerous animated shorts, often showcasing lesser known properties. All the shorts are officially available on the official DC Comic's YouTube channel on a playlist located here

Compare with Marvel Universe, a similar block on Disney XD that features content based off Marvel Comics properties.

The block was discontinued in 2014 with some of the shorts occasionally airing around Teen Titans Go! That show was moved to the regular rotation with CN's other current shows, where it presently runs. Beware the Batman was put on the Toonami block before Cartoon Network wrote off the broadcast rights to the series. Toonami managed to premiere every episode by running a marathon of the episodes they had yet to get to when the write-off was announced.