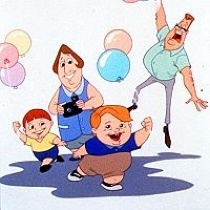 "Let me tell you about my family."
— Louie Anderson as the episode starts
Advertisement:

Life With Louie is an American cartoon co-created by stand-up comedian and actor Louie Anderson and loosely based on his childhood. The series ran from 1995 to 1998 and won multiple awards, including two Emmy Awards.

The story is set in Wisconsin in The '60s. Louie Anderson is an 8-year-old kid, living with several brothers and sisters, mother Ora and father Andy. Andy is a neurotic, overbearing but caring World War II veteran who often seems to be a little... out of touch with reality. We follow Louie's adventures and everyday life, which would be pretty simple (eating, sleeping, watching TV, having a crush on schoolmate) if either Louie or Andy wouldn't constantly botch it.

To this day, the show is still not available on DVD, even though many other cartoons from the same era are- since it was a show that was produced and aired on Fox Kids, it's expected.

Not to be confused with ''Life With Loopy'', which is an entirely different thing.

Life With Louie provides examples of: