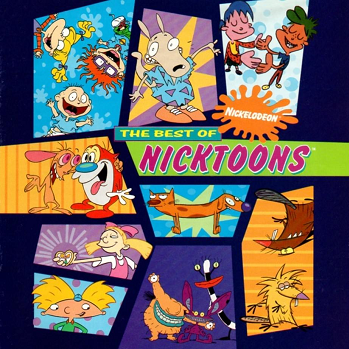 "In 1991, Nickelodeon spat in the eye of the animation world, and launched the Nicktoons: fresh, original, cutting-edge, as only Nicktoons could be."
—SpongeBob, Nicktoons TV launch promo

Nicktoons is the brand name used to describe Nickelodeon's slate of original animated series. If you were looking for the channel named after the Nicktoons, see here.

The first three Nicktoons premiered on August 11, 1991, essentially reinvigorating the market for creator-driven, original animated series that had all but died out in the wave of Merchandise-Driven Saturday Morning Cartoons that defined Western children's programming during the 1980s. Ever since, the Nicktoons have remained one of the most popular aspects of Nickelodeon.

Most of these "original animated series" are...well, original. Until the 2010s, the official Nicktoons were all based on homegrown characters that originated on Nickelodeon.note The iffy DreamWorks shows are explained below. In other words, these Nicktoons came straight from the minds of Nick’s own artists. That all changed when Nick's parent company, the almighty Viacom, bought two kids' TV franchises at the turn of the New '10s decade: Teenage Mutant Ninja Turtles and Winx Club. Nickelodeon Animation Studio double-dipped and produced new "Nickified" versions of both shows (with some of the original creators onboard!).

Another exception came about when Nick partnered with DreamWorks Animation to produce three spin-off shows based on DW's animated movies. Unlike the two above, these shows' status as part of the Nicktoons Canon is in a gray area. While they were made by Nick Animation Studio and Viacom owns half of the copyright, DreamWorks stopped licensing their characters to Nick in 2016. As a result, Nick doesn't recognize the DreamWorks trio as part of the Nicktoons brand. This could best be seen when Nickelodeon left the second and third DreamWorks shows out of their otherwise-complete "2010s in review

" retrospective, which showed all of (and only) their originally-produced shows from the 2010s.

Vote for the best show here!

There is a Broken Base on whether or not the following are a part of the Nicktoons canon or not for varying reasons:

DreamWorks Animation shows
These three shows aren't generally considered part of the Nicktoons brand despite having all of the qualifications. It's likely a case of Screwed by the Lawyers, since DreamWorks Animation ended its partnership with Viacom in 2016 following its acquisition by NBCUniversal. While Viacom owns half of each show's copyright and Nickelodeon Animation Studio was involved with all of them, Nick has excluded them from lists and compilations since 2016. Yes, even their otherwise complete roundup

of every Nick original from The New '10s.note In case you're wondering, both Teenage Mutant Ninja Turtles and Winx Club were featured as Nick originals, as usual. The franchises may have existed before the decade, but Nick always treats them as 2010s intros to the canon.