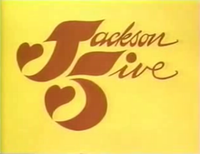 The Jackson 5ive was a cartoon show from Rankin/Bass Productions that starred (who else?) The Jackson 5. No, not the real onesnote Although they can be seen in the opening and ending sequences.

It only lasted two seasons on ABC (1971-1973), but who wouldn't love seeing Jackie, Tito, Jermaine, Marlon, and dear adorable little Michael, in Saturday Morning Cartoon form? The episodes employed plenty of slapstick and clever one-liners, and you could be sure that you heard two Jackson 5 songs in every single episode. With a few exceptions, these songs usually had nothing to do with the plot, so it was like they were in a musical.

Most of the episodes starred all five Jackson brothers in silly situations, but other episodes centered on Michael as the main character having a dream based on fairy tales and popular stories, along the way making friends with characters who looked a lot like his brothers. When Michael wakes up from his dream, the others don't believe him when he tells them about it.

Other Recurring Characters include:

The Jackson 5ive provides examples of: