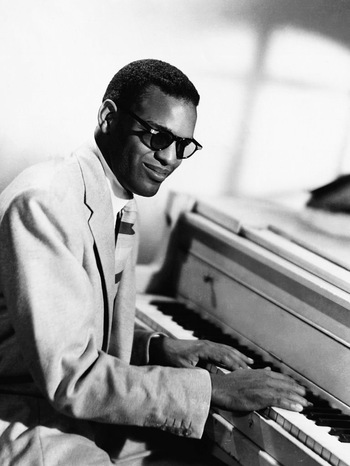 "I was born with music inside me. Music was one of my parts. Like my ribs, my kidneys, my liver, my heart. Like my blood. It was a force already within me when I arrived on the scene. It was a necessity for me — like food or water."
Advertisement:

Ray Charles Robinson (September 23, 1930 – June 10, 2004) was an American musician. One of the first performers to fuse R&B and Gospel Music to create the Soul genre in The '50s, he also exerted a major influence on the development of the Rock & Roll genre.

Losing his sight to an infection at a young age and educated in music at a school for the blind, Ray became a talented musician and multi-instrumentalist who got his start singing and playing piano and organ with country and blues bands in the 1940s. Although he recorded a few minor hits, his big break came when he was signed to Atlantic Records in the early 1950s and recorded songs such as "Mess Around" (written by Atlantic co-founder and president Ahmet Ertegun), "I Got A Woman", "Hallelujah, I Love Her So" and "What'd I Say", which combined raw, passionate gospel energy with boogie-influenced music and secular lyrics. While this music provoked some controversy at the time, these songs are now recognised as some of the first soul songs and established Ray as the pioneer of a whole new genre.

Subsequently, he joined a major label (ABC-Paramount) and decided to explore new sounds, including Jazz, Pop and especially Country, which earned him some of his biggest hits, including "Georgia On My Mind", "Hit the Road Jack" and "I Can't Stop Loving You" (a song which is now credited for helping to popularise country outside of its traditional audiences). Although he struggled with drug addiction and sporadic success after the 1960s, interest in his music was renewed thanks to his appearance in The Blues Brothers in 1980, reinforced by being the musical spokesperson for a popular TV ad campaign for Diet Pepsi, and he remained popular until his death from cancer in 2004.

Ray's influence on other singers and musicians cannot be understated; Frank Sinatra called him "the only true genius" in popular music, Billy Joel was hugely influenced by his piano playing and singing, the members of The Beatles all expressed their admiration for his achievements, with Paul McCartney crediting him as his reason for getting into music, and his song "What'd I Say" was allegedly the first song Mick Jagger performed as a member of The Rolling Stones.

His early life, rise to fame, dalliances with drug addiction and involvement in the civil rights movement are chronicled in the Academy Award-winning Biopic Ray, released only a few months after his death. He was set to attend the premiere had he lived. As it was, he was still able to attend a private screening with the crew.

Albums by Ray Charles that have their own page:

The song "Hit the Road, Jack" by Ray Charles is used for a fanmade animatic by SAD-ist, done in the style of a movie trailer complete with a moody cover song by 2WEI.

The song "Hit the Road, Jack" by Ray Charles is used for a fanmade animatic by SAD-ist, done in the style of a movie trailer complete with a moody cover song by 2WEI.