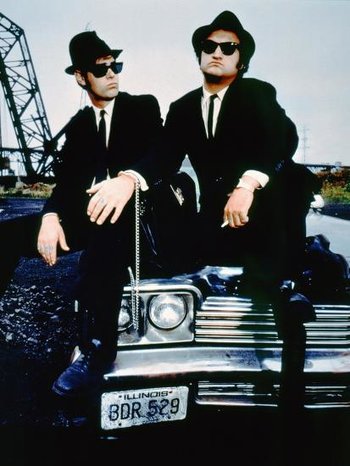 "They'll never catch us. We're on a Mission from God."
Elwood: It's 106 miles to Chicago. We got a full tank of gas, half a pack of cigarettes, it's dark, and we're wearing sunglasses.
Jake: Hit it.

The first Saturday Night Live skit to be spun off into a movie, and arguably the best.

In the late 1970s, during Saturday Night Live's early years, Dan Aykroyd and John Belushi starred together in an occasional sketch-cum-musical-act featuring the two of them in dark suits and sunglasses as "The Blues Brothers"; Belushi was Jake Blues, and Aykroyd was Jake's silent brother Elwood. What made the skits good? The duo were skilled at both the comedy (which was obvious) and the music (which was surprising). Aykroyd and Belushi spun off their own band with established musicians (members of the SNL house band as well as experienced R&B musicians) and served as the frontmen, in character as Elwood and Jake; their 1978 album Briefcase Full of Blues was a big success in its own right, topping the Billboard album chart and producing a Top 20 hit single with their remake of the Sam & Dave classic "Soul Man".

In 1980, they got a musical-extravaganza feature film—titled The Blues Brothers—that quickly and deservedly became a Cult Classic. "Joliet" Jake Blues has just been released from prison, with Elwood there to pick him up in a battered piece of crap that used to be a police car. (Elwood is not silent in this film; he gives some serious lectures.) Fulfilling a promise made before Jake began serving his sentence, the brothers go to the Chicagoland orphanage where they grew up and visit "The Penguin", the nun who runs the place. During this meeting, the brothers learn that the orphanage is about to be closed down if its $5,000note  Roughly $17 K in 2022 property tax bill cannot be paid off by the end of the month.

The brothers head to a nearby church as they try to figure out a way to save their childhood home. While listening to a sermon from James Brown, Jake sees the light (literally) and has an epiphany in the form of a Mission from God: the Blues Brothers must get their band back together so the band can raise the money to save their old orphanage—no matter what. Along the way, they meet up with Cab Calloway, Carrie Fisher, Aretha Franklin, Ray Charles, John Candy, Henry Gibson, Twiggy, Frank Oz, Chaka Khan, John Landis, Paul Reubens, and Steven Spielberg. Hilarity Ensues, some damn good music gets played, and every last police car in the City of Chicago is destroyed.

There was a sequel titled Blues Brothers 2000 (which was actually produced in 1998). The sequel didn't go over as well as the original, in part because some important players, most notably John Belushi, had died in the interim. (The death was actually worked into the film's plot; it didn't really help, but it was at least respectful to Belushi.) Some admit that though the plot wasn't as up to snuff as the original, the music at least was pretty good. John Landis helmed the director's chair on both movies.

The Blues Brothers would later get selected for preservation for National Film Registry in 2020.

"We're getting the tropes back together!"