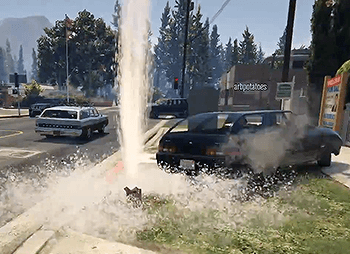 "Cool 'er off, sucker!"
— Any of the Turtles, Turtles in Time
Advertisement:

In media when an out of control car runs over a fire hydrant the inevitable result is a geyser of water that instantly adds both drama and excitement to the scene. In reality the most likely result is a good deal of front end damage and a bill to repair the broken hydrant, but in a non-trivial amount of cases the car will wind up as an aquarium. What determines if this trope is Artistic License or Truth in Television is the design of the hydrant.

Hydrants known as "wet barrel" bring highly pressurized water all the way up into the part that sticks above ground. Hydrants known as "dry barrel" keep the vital valve equipment many feet underground, which are then opened via a long shaft.

Any location subject to cold temperatures must employ dry barrel hydrants to avoid problems with burst pipes. This combined with the protection against the very calamity that the Hydrant Geyser portrays is why dry barrel hydrants make up the overwhelming majority of installed units in North America. Of course with wet barrel units being acceptable in warm locations such as Southern California, that design makes up the majority seen in media, hence the popularity of the trope.

This trope is constantly hovering on the border of becoming discredited or even a dead horse, with spoofs and parodies making up a large number of examples, however it is frequently played straight both in media and Real Life. Like the exploding car, this trope maintains a strong grip on the popular psyche causing people to be genuinely surprised when hydrants are knocked over with little fanfare.

The presence of a Hydrant Geyser can always be Hand Waved away by saying that any given dry barrel unit was accidentally left pressurized via an open valve.

Often the geyser is preceded by a comical rumbling of the ground as if the hydrant acted as some sort of champagne cork or oil well cap. This is always wrong as a pressurized hydrant will instantly gush water, not take a few seconds to "get going".

Feeling threatened by Zane, Cleo summons water from a nearby hydrant to blast him away.

Feeling threatened by Zane, Cleo summons water from a nearby hydrant to blast him away.