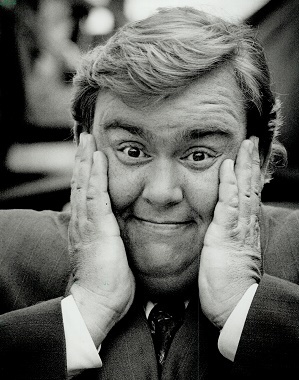 "As long as you can savor the humorous aspect of misery and misfortune, you can overcome anything."
Advertisement:

John Franklin Candy (October 31, 1950 – March 4, 1994) was a Canadian actor and comedian. He came to wide public awareness as a member of the Second City comedy troupe, and its TV series, SCTV. Known for bringing warmth and likability to characters who otherwise would have been incredibly obnoxious, he appeared in such comedies as Stripes, Splash, Cool Runnings, The Great Outdoors, Spaceballs, Uncle Buck, and Planes, Trains and Automobiles.

Candy was born in Newmarket, Ontario, the child of a working-class Roman Catholic family. His first big acting gig was the short-lived, late-night 1976 television talk show Ninety Minutes Live (where he was partnered with future co-star Rick Moranis). That same year he joined the cast of SCTV. In 1980, he moved from the small screen to the movies. His first film appearance was as a supporting player in Steven Spielberg's 1941, and from there he appeared as Joliet Jake's parole officer in The Blues Brothers in the same year. Candy also had a Saturday Morning Cartoon in the late 1980s called Camp Candy, where he voices himself as a camp counselor to a bunch of misfit kids. Camp Candy is the second cartoon created by an SCTV cast member (after Martin Short's The Completely Mental Misadventures of Ed Grimley), though Candy's counselor character was not based on a recurring character he did on SCTV. Conversely, he played numerous roles, including the ultimate Mr. Fanservice, Den, in the adult animated film, Heavy Metal.

Unusually, many film critics believe that his best performance isn't any of his comedies, but rather is his cold-blooded, hostile performance as Dean Andrews Jr., a shady Southern lawyer in Oliver Stone's JFK.

Candy struggled with obesity throughout his adult life, along with the accompanying problems of high blood pressure and diabetes. While filming his last movie (the critically panned Wagons East!), he suffered a fatal heart attack while sleeping, and died at age 43. Although the majority of his scenes had been shot, Canadian Bacon was released more than a full year after his passing.

In 1998, Candy was inducted into Canada's Walk of Fame, and in 2006, Candy became one of the first four entertainers ever honored by Canada Post by being featured on a postage stamp.

Example of:
Death by Cameo