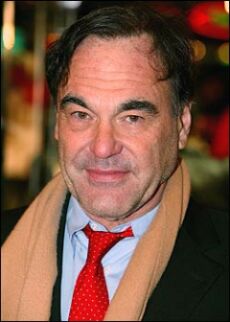 William Oliver Stone (born September 15, 1946) is an American screenwriter, director, and producer best known for his films about controversial social and political issues. After wetting his feet in Hollywood with the screenplays for Scarface (1983) and Midnight Express, Stone was finally able to direct his legendary war film Platoon, which drew largely on his own experiences as an infantryman in Vietnam, and earned him Oscars for Best Picture and Best Director. He would follow this film with the critically acclaimed Wall Street, Talk Radio, and Born on the Fourth of July (another Oscar winner for Best Director) before making headlines with his ultra-controversial (due to its liberal use of Artistic License in portraying historical events) 1991 film JFK, which took a look at the assassination of John F. Kennedy. He followed the success of JFK up with the Biopic Nixon, which faced equally harsh criticism (though unlike JFK, it acknowledged its artistic license up front) and was a financial flop. The one-two punch of JFK and Nixon has led to the depiction of Stone as a Conspiracy Theorist filmmaker.

The box office failure of Nixon made it difficult for Stone to get new movies off the ground, and he briefly moved into Producing, supporting the successful films The Joy Luck Club, The People vs. Larry Flynt, and Reversal of Fortune, among others. He did continue to direct, though, with the films Natural Born Killers and U Turn, neither of which were as successful businesswise as his previous films (though Natural Born Killers became a Cult Classic), but he eventually had a major box office success with the football film Any Given Sunday and a few successful TV documentaries that documented his interviews with controversial figures such as Fidel Castro, Hugo Chávez and the leaders of Pakistan.

In 2004, Stone was finally able to make his passion project, the historical epic Alexander, about the life of Alexander the Great. It ended up being a critical and commercial failure in the United States, though it made tons of money overseas and was a success on home video. Stone was never fully satisfied with the theatrical release of the film, and released a pair of ReCuts on DVD which were considerably more well-received than the theatrical release. Following Alexander, Stone made a film about 9/11 titled World Trade Center, which surprised audiences by not being a cynical Conspiracy Theory film, but rather a hopeful tribute to those who worked to save the lives of the victims of the WTC attacks. Similarly, his George W. Bush Biopic W., released in 2008, surprised many by being very sympathetic to the man (though it must be said many people had similar reactions to Stone's portrayal of Nixon). He later released a long-gestating sequel to Wall Street entitled Wall Street: Money Never Sleeps which, while a financial success, had mixed reviews. In 2012, he created a documentary series for Showtime, The Untold History of the United States. After completing Snowden in 2016, he continued his series of "controversial interviews" by meeting with Vladimir Putin several times.

Despite the tendencies of his films to be less than subtle, Stone is a very talented director whose movies always have a sense of audacity and a dynamic visual style. He's also great at getting fantastic performances from his cast, even (some would argue especially) when they seem to have come from the WTH, Casting Agency?. Also, as many of the subjects that his films cover are Flame Bait, Stone himself is often subject to hyperbole and criticism, so be aware of this before you talk to someone about him.