Film / Any Given Sunday 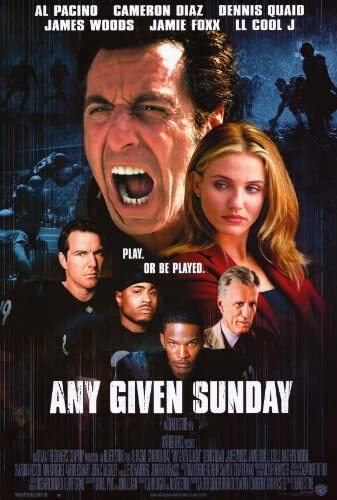 "The point is I'm trying to fucking get paid. That's the point."
— J-Man Washington
"You know when you get old in life, things get taken from you. That's part of life."
— Tony D'Amato
Advertisement:

Any Given Sunday is a 1999 sports drama film, starring (among others) Al Pacino, Cameron Diaz, Dennis Quaid, James Woods, LL Cool J, and Jamie Foxx. It's directed and co-written by Oliver Stone, so think The Replacements (2000) meets Natural Born Killers.

The Miami Sharks, an ailing professional American Football franchise, suddenly lose their first- and second-string quarterbacks to injury, and third stringer Willie Beamen (Foxx) gets a shot at glory when he becomes the team's starter for the remainder of the regular season. Along the way, the movie takes a long, unflinching look at various aspects of pro football: clashing egos, front-office meddling, playing hurtnote which was the name of one of the screenplays that became Any Given Sunday, sacrifice, and getting old. This is punctuated by some freakin' intense scenes of the game.