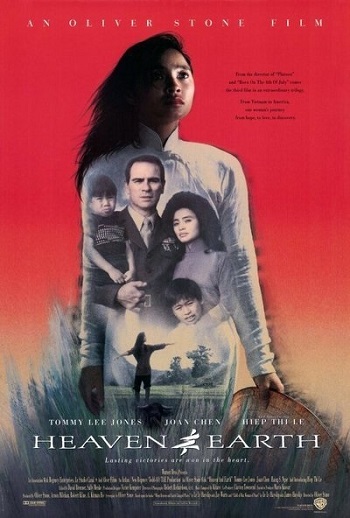 Released in 1993, Heaven & Earth is Oliver Stone's third film about The Vietnam War, following Platoon and Born on the Fourth of July. These three films are often said to form a "trilogy", although they merely share subject matter and do not take place in a shared continuity.

This film is most notable for telling the story of the war from the Vietnamese perspective, a viewpoint which Stone had been criticized for excluding in his two previous Vietnam films. The movie is Very Loosely Based on a True Story, being adapted from the memoirs of Le Ly Hayslip, a Vietnamese peasant girl who married an American soldier and became a humanitarian in the U.S.

Not to be confused with the Hong Kong film Tian Di which is re-titled Heaven and Earth in foreign releases.