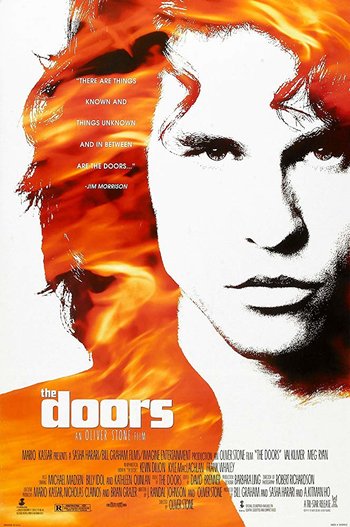 The Doors is a 1991 American biographical film about The '60s–'70s rock band The Doors, and in particular the life of its lead singer, Jim Morrison. It was directed by Oliver Stone, and stars Val Kilmer as Morrison and Meg Ryan as Morrison's companion Pamela Courson. The film features Kyle MacLachlan as Ray Manzarek, Frank Whaley as Robby Krieger, Kevin Dillon as John Densmore, and Kathleen Quinlan as Patricia Kennealy.

The film portrays Morrison as the larger-than-life icon of 1960s rock and roll, counterculture, and the drug-using free love hippie lifestyle. But the depiction goes beyond the iconic and into his alcoholism, interest in hallucinogenic drugs, and, particularly, his growing obsession with death.

The film was a box office bomb, received mixed reviews upon release, and was criticized by Morrison's family, friends, and former bandmates for the film's bevy of historical inaccuracies, particularly in regards to Morrison's portrayal. Ray Manzarek claimed in his own written biography of the band that the film was damaging to Morrison's reputation, Patricia Kennealy disavowed the film for its portrayal of herself and objected to the film version of Morrison not taking their Wiccan wedding ceremony seriously, and Stone himself admitted to heavily embellishing historical events for the sake of the film's narrative. Regardless of (or perhaps because of) the controversy, the film generated renewed interest in the Doors, thirteen years after they had split up, an interest which still continues in a mild form to this day.