Film / Down with Love 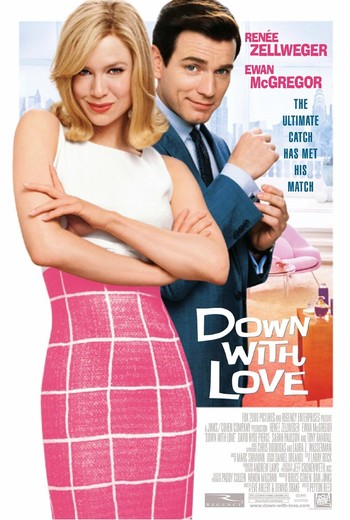 A 2003 farce, directed by Peyton Reed and starring Renée Zellweger and Ewan McGregor, that both lampoons and homages classic romantic comedies from the late 1950s and early '60s, particularly Pillow Talk and the other Doris Day/Rock Hudson movies of the era.

In 1962, aspiring author Barbara Novak (Zellweger) arrives in New York to publish her book, Down with Love, which encourages female empowerment through chocolate and casual sex. It becomes an international bestseller, even edging out a biography of John F. Kennedy, and millions of women everywhere buy it and start learning from its precepts. This does not sit well with the majority of men in the world, least of all Catcher Block (McGregor), a reporter for Know magazine and a Casanova rivaling James Bond himself in both suaveness and libido. After Novak calls him out for his behavior on national television, he hatches a scheme to get her to fall in love with him, thereby violating her own golden rule. She's already expressed her displeasure with him, so in order to get into her pants, he fabricates the persona of a country-boy astronaut who has just touched back down to earth, and as such has no idea of her book or her identity.

There is also a Beta Couple of Barbara's chain-smoking best friend and publisher Vikki Hiller (Sarah Paulson) and Catcher's neurotic boss Peter MacMannus (David Hyde Pierce), who get drawn into the hijinks of Catcher and Barbara.

(For the 2010 Taiwanese Series of the same name, see Down with Love.)